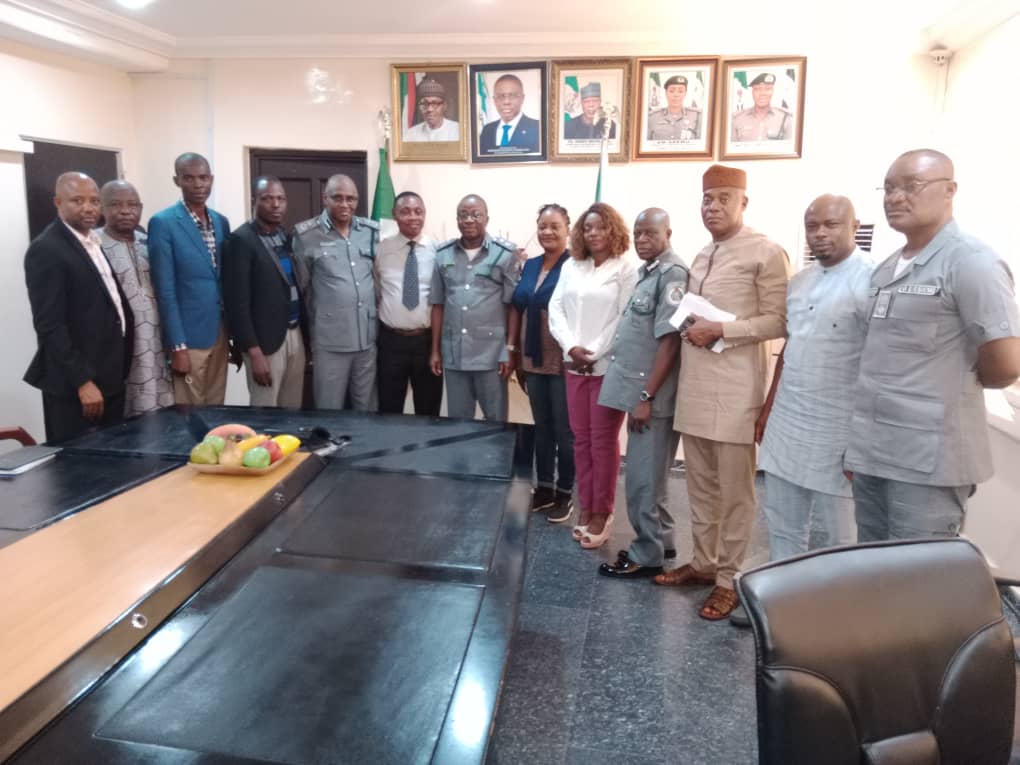 AMJON team with the Customs team during the visit.

The Customs Area Controller of Tin Can Island Command, Comptroller Kunle Oloyede has affirmed that to discourage smuggling, the Federal government has reduced duty paid on imported vehicles from 35% to 20% and that it may even come down the more.

He also informed that at assumption of office, he reel out his three points agenda to include, discipline, increase in revenue and trade facilitation.

The Tin Can Controller stated this recently, when the executives of the Association of Maritime Journalists of Nigeria (AMJON) paid a courtesy visit to him at the Tin Can Island Customs Command.

He told the group of journalists that on his resumption at the command, he was given a daily target of N2.5 billion from the previous N1.5 billion daily target. And within barely six weeks of his being in office, despite the two weeks strike action embarked upon by freight forwarders due to the Vehicle Identification Number (VIN) policy, he has increase the revenue of the Command by over N25billion.

Comptroller Oloyode said, “The revenue as at the time I got here it was N1.5bn revenue target per day. So I was given a revenue target of N2.5bn per day. And I had the first parade , I told my officers three key things in no particular order, discipline, increase in revenue and trade facilitation.

“I am also in agreement with the World Customs Organization (WCO) and the World Trade Organisation (WTO) article that says for West Africa and Africa generally, we should do low tax and high turn around time. When you have low tax and turn around, you make more revenue.

On the controversy over reduction in duty on imported used vehicles, the Controller who confirmed the reduction, stated that such move was necessary to reduce the smuggling of vehicles into the country.

According to him, the duty may drop further because by so doing, smuggling will become unattractive to the people
“Because when you check what is happening around, its those high values, high rate of duty that allows smuggling through our ports and borders.

“Two to three days ago, the duty of vehicles dropped to 20%, government is looking at it that iwhy new vehicles pay 35% duty and old vehicles also pay 35% duty, when after giving backwards integration incentives to most of these assembling plants, we don’t have Vehicle plants that can really satisfy the demands of transport sector.

“I think that is why government in its decision decided to drop the duty and its going to drop further. From grapevine am hearing that there could be further reduction as to discontinue smuggling. We want to make smuggling not to be lucrative again, that is the way government is looking at it.

On revenue drive, Comptroller Oloyede said the management team of the command have started making moves to lure people back to the command for more revenue generation. He enthused that since his coming to the command, the revenue has improved significantly due to engagement with stakeholders

“I can tell you, when we compare revenue from the time I came in up to now, we have over N25 billion extra , compared to N24 billion it was before because I have been able to lure back people that are into bulk cargo. I have been able to convince them to come back to Josepdam terminal.

“I visited Josepdam today, I told them that my doors are open, the doors of my DC Enforcement, DC in charge of bulk cargo are open.

Earlier, the CAC admonished journalists on developmental reportage from well informed judgement of issues before going to the press. He commended the AMJON for carving a niche for itself, saying he noticed that there is a great difference in their reports.

“Yes you may have one or two incidents but, I always urged you to always ask from both sides before you go to the press, this will give you a very informed judgment about what we are doing.

“It’s a great opportunity to meet you today because am barely six weeks here” he said.