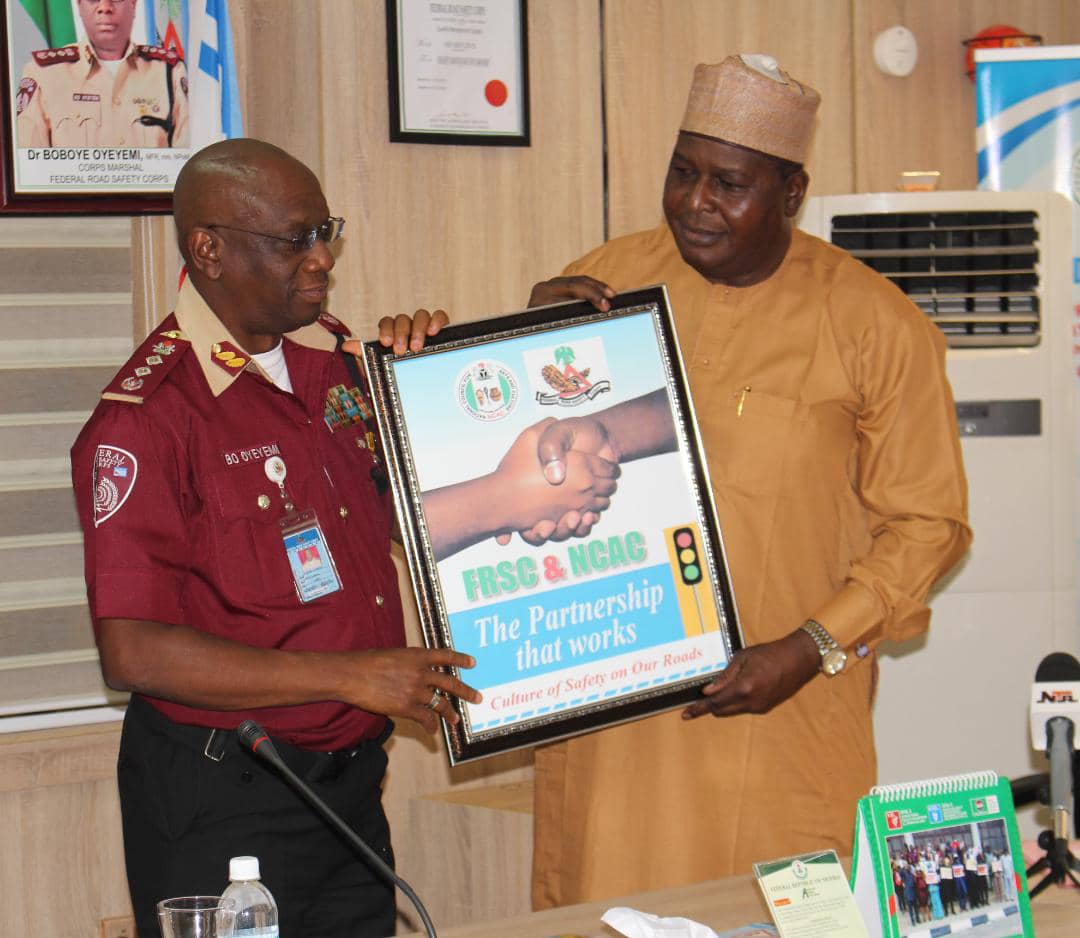 The Director General, National Council for Arts and Culture, Otunba Segun Runsewe presenting the symbol of the cooperation between the two organisations with the insignia ” NCAC and FRSC The partnership that works” to the Corps Marshall, Federal Road Safety Commission, Boboye Oyeyemi at the RRSC headquarters in Abuja

The National Council for Arts and Culture ( NCAC) and the Federal Road Safety Corps ( FRSC) have cemented plans to kickstart a massive campaign of Culture of Safety on Nigerian roads for all road users. 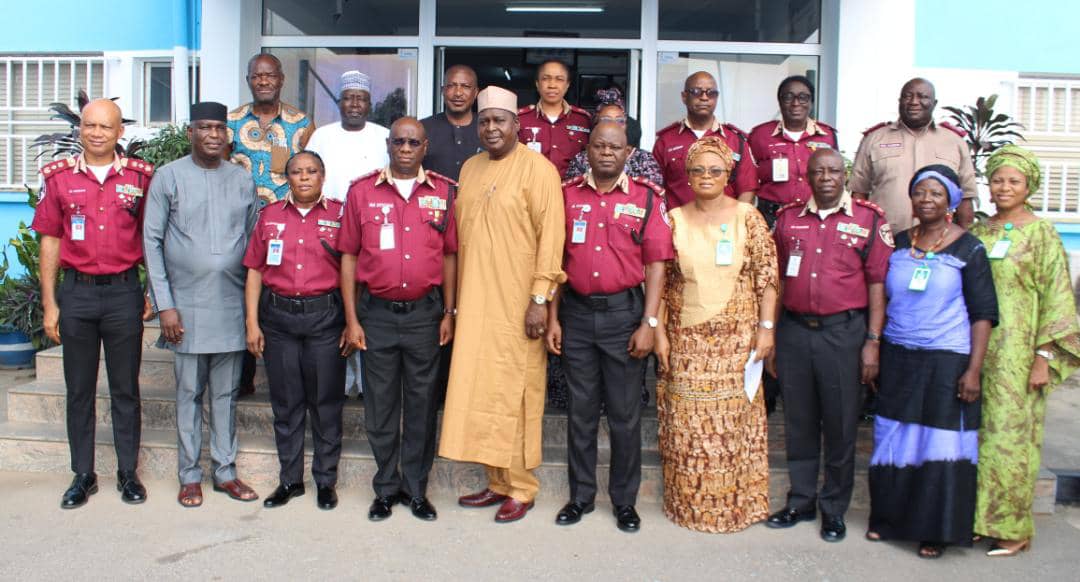 This decision was the outcome of a meeting between the Director General, NCAC , Otunba Segun Runsewe and the Corp Marshal of the FRSC , Boboye Oyeyemi at the Corp headquarters in Abuja.

Otunba Runsewe who expressed appreciation to the Corp Marshal for the warm reception accorded him and his management team, said he was overwhelmed with the state- of- the art facilities at the Corp monitoring and control room as well as the FRSC radio station broadcasting from 107.1 FM when he was conducted round.

Runsewe commended the Corp Marshal for his visionary leadership which has culminated in the sustenance of the vision and mandate of the FRSC.

The NCAC, Director General however noted with dismay that major causes of mishaps on our roads stem from the fact that our cultural values as Nigerians have been eroded adding that there was urgent need for a reorientation for all road users.

He also stressed the need for increased synergy and collaboration between both organisations to sensitise road users on the moral imperative of imbibing the culture of safety on our roads to reduce accidents and avoid unnecessary loss of lives.

According to Runsewe ” it is alien to our culture to drink and drive. It is also not in our culture to use electronic gadgets like phones and to overspeed while driving adding that NCAC is ready to collaborate with the FRSC in it’s drive to educate Nigerians on the need to restore sanity on our roads by reenacting the culture of safety”.

Runsewe presented to the Corps Marshal and his top management team promotional materials to aid the enlightenment campaign of the FRSC and called for increased funding for the Corps to enable it fulfil it’s core mandate of making our roads safer.

In his response, the Corp Marshal of the Federal Road Safety Corp expressed delight for the visit which he said came at a time when the commission needed to increase it’s synergy with critical stakeholders on measures to ensure attitudinal change of road users.

Oyeyemi said the FRSC was proud to partner with NCAC that has a deep passion for the Nigerian project and has contributed immensely in beaming the image of Nigeria home and abroad within the Culture and tourism space.

He maintained that one of the cardinal responsibilities of the FRSC is to ensure that all road users especially the drivers at various motor parks across the country are well schooled on safety protocols before embarking on their journey adding that the exercise has yielded positive results as cases of accidents on our roads have reduced drastistically.

The Corps Marshal expressed the FRSC readiness to collaborate with the NCAC by allocating a 30 minutes slot on the FM Radio for the Corps educational officers and for NCAC to introduce the much needed cultural content in it’s safety and enlightenment campaigns to the public as much still needs to be done in that regard.

The Corps Marshal while presenting safety books for the NCAC library expressed delight on the veritable platform created by the parnership and remarked that NCAC will form an integral part of it’s campaign machinery since it has the capacity in terms of language, dance arts and crafts to culturally drive home the safety messages.

Highlight of the meeting was the unveiling of the symbol of cooperation between the two organisations with the insignia: NCAC and FRSC a partnership that works, followed by presentation of gifts by the heads of both organisations