CUSTOMS , NAFDAC OTHERS  DESTROYS SEIZED MEDICAMENT WORTH OVER N100M 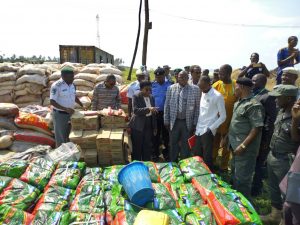 Seme Command of the Nigeria Customs Service has destroyed expired seized medicament and other items that were deposited in its government warehouse worth over N100m.

According to  the Customs Area Controller, Mohammed Aliyu Alhaji, he disclosed that the expired and hazardous medicament seized and destroyed has a Duty Paid Value (DPV) of N102,488,300.

The destruction  exercise was carried   out  by the Controller in company of the Director General of National Agency for Food and Drug Administration and Control (NAFDAC) Professor Mojisola Christiana Adeyeye and Director Ports Inspection Directorate Professor Samson Adebayo who were in the Command for a working visit.

The  Seme Customs boss  noted that the destruction exercise was in compliance with the service extant laws were the relevant agencies like NAFDAC, NDLEA and SON were principal witness.

The Commands helmsman further stated that he will continue to implement government policies of seizing and handing over to the relevant agencies such as National Drug Law Enforcement Agency (NDLEA) dangerous and illicit drugs that are smuggled through the land border.

He warned drug traffickers to keep off from Seme border route as any attempt to smuggle will be discovered by the eagle eyes of the enforcement team of the NCS.