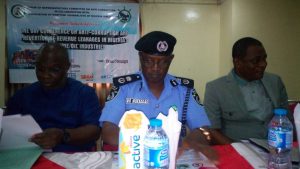 The Nigeria Customs Service (NCS)  Zone A, has disclosed that a total of 76 cases bothering on imports  and exports related offences are currently under the Legal Unit between January and July 2018.

Comptroller General of the Customs,  Col. Hameed Ali  (rtd) gave the figure at a One Day Workshop on Prevention Of Revenue Leakages in the Maritime and Oil & Gas industries, put together by the Association of Maritime Journalists of Nigeria (AMJON) yesterday in Lagos.

The CG who was represented at the event by the Assistant Comptroller General  and Zonal Coordinator in charge of  Zone A,  Lagos, Aminu Dahiru pointed out that the Service cannot do much in the area of prosecution but added that it would continue to appeal to the conscience of the shippers.

“When I was posted to the zone last year, my major program is to prosecute because I believe it will serve as a deterrent  in all the commands under my zone.

“As am talking to you now ,our legal system and legal adviser need to be posted from the ministry of justice and in this zone alone for the year 2018,we have not less than 76 case files  that has to do  with imports and exports related offences “,he stated.

Speaking further on the issues of corruption in the ports system, the Customs boss further  identified greed,  desire for power and the wish to advance oneself as some of the factors responsible for corruption and it’s effects on the society.

He adduced revenue leakages to false declaration,  falsification of documents, wrong classifications, under valuation  and waivers.

According to Dahiru, the adverse effects of revenue leakages on national economy includes, less revenue available for citizens welfare and  infrastructural development.

Others are, reduction in government’s ability to provide funds for national security,  reduction in public trust and confidence in the NCS to deliver on its mandate as well as reduction in voluntary compliance with Customs laws and regulations, among others.

Resolving to nip the menace in the bud,  he stated the the Service had initiated the upgraded NICIS 2 to interconnect more stakeholders and automate more processes.

Introduction of Electronic payment system for imports  duties and other charges and developing the Nigeria Trade Hub that encompasses all trading partners with the service.

The Zonal, Coordinator of the largest revenue generating zone of the Customs, zone A, Lagos called on all importers  and their Agents to imbibe the spirit of patriotism by paying the correct duties and taxes to drive the process of economic growth and development.