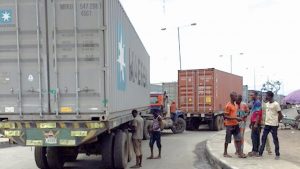 Shipping Companies have been blame for the recent containers logjam in Lagos roads.

Aside from the bad roads, Mr Ene Usanga hinted our Correspondent that since the shipping lines have refused to carry empty containers after discharging incoming ones, empty  containers will continue to litter Lagos roads.

In a chat with Chief Enebong Usanga a frontline  Clearing Agent, he said the secret of the many empty  containers on our roads is that unlike before were every incoming ship after offloading its contents will carry empty containers back, but now the shipping companies refuse loading empty containers on outgoing ships in order for it to accrue demurrage for them .

He said for now empty containers deposits ranges from  N400,000 to N600,000 depending on the destination.

He called on the Federal Government to intervene or else things will get out of hands in the maritime industry.

In the past four days over 14,000 containers have jampacked  in  Lagos roads blocking major roads leading to the ports in Lagos.

Today , the Vice President, Prof Yemi Osibanjo visited the Apapa area of Lagos state where the trucks are parked , but it was not clear on what the Federal Government will do to arrest the situation.