FOU ‘A’ Seizes Contrabands Worth N1.1 billion in 5 Weeks

As the hunting down of smugglers in the Western States of Lagos, Ogun, Oyo, Osun, Ekiti, Ondo  States and its environs by Operatives of Federal Operations Officers of

the Nigeria Customs Service (NCS) zone ‘A’ continues, the Unit has again recorded another major feat in five weeks.

Briefing Newsmen, the Unit’s Controller, Comptroller Mohammed Uba said from June 13th to July 24th 2018, a total of 143 seizures amounting to N1,120,714,338.12 worth of goods  was recorded in an intensified operational modalities. 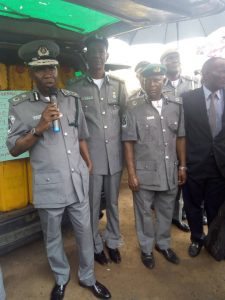 Of a particular interest in the intercepted  goods was  a truck  carrying 498 cartons of CSP Codeine Cough Syrup of 100ml with each cartons containing 200 bottles. The value of the drugs was put at N199,200,000 , two suspects were also nabbed in connection to the illegal import.

Conducting journalists round the seizures, the Customs Area Controller (CAC) of the Unit, Comptroller Mohammed Uba Garba said while some of the items were intercepted along Ijebu Ode expressway, in Ogun state, some of the cars under detention by the Unit  were evacuated from Oluwalogbon Motors in Ikeja, Lagos based on credible information for lack of Customs papers .

He added that ten suspects were arrested in connection with all the seizures saying some had been released on administrative bails, while the rest were still held up in the service detention facility.

Uba  mention that the Officers and Men of the Command intercepted an Iveco Truck with registration number LAM 283 LG along Ijebu Ode Road carrying 498 cartons of CSP Codeine Cough Syrup 100 ml with each carton containing 200 bottles.

He further stated that the substance and the suspects would be handed over to the National Agency for Food and Drugs Administration and Control (NAFDAC) for further investigation and prosecution in court of competent jurisdiction.

He said, “Also, two containers were seized while 1/40 container with no PCIU922650/8 was seized for carrying 525 bales of second hand clothing as against used motorcycles declared in the SGD,.

“Another  forty  foot container with number PCIU871664/5 was seized for carrying eleven jumbo bales of Jeans, 365 cartons of new Slippers and 145 cartons of new bags as against Adhesive Dressing declared.

Uba however called on Nigerians to support the Customs efforts in fighting smuggling for the betterment of our economy.