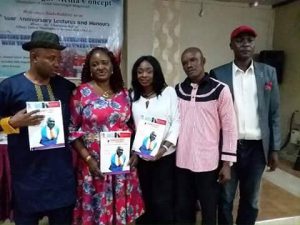 Stakeholders in the maritime industry have called on Journalists to be constructive in their reportage as a way of nation building and economy development.

The appeal was made on recently at the first anniversary lectures and honours organised by Searchlight Media Concept, publishers of Global Searchlight Magazine in Lagos.

According to the speakers, objective and constructive reportage which  focus on issues and not personalities would  prompt the industry players to double their efforts in building the nation’s shipping sector.

The Chairman of the occasion, Taiwo Mustapha while giving his opening address, said that journalism is a good profession, but added that some reports are unbalanced and biased.

Mustapha who is the Chairman of Board of Trustees (BoT) of the Association of Nigerian Licensed Customs Agents (ANLCA) , was represented by Prince Taye Oyeniyi, Secretary, of the board, charged members of the pen profession to use their talents to bring out the best  of the country and the industry .

In his words, “Constructive journalism is very good, but so many times, we read unbalanced reporting.

“We want to use this forum to appeal for constructive journalism.”

Also speaking, Emmanuel Agubanze, Deputy National President, Special Duties, National Association of Government Approved Freight Forwarders (NAGAFF) called on the media practitioners to focus their reports on issues and not on personalities in order to make them relevant in their profession.

Agubanze who represented the founder of NAGAFF, Dr. Boniface Aniebonam said, “Constructive journalism is what we look out for and not personalities.

The event had in attendance notable players in the sub sector, which include the Assistant Comptroller General of the Nigeria Customs Service and Zonal Coordinator, zone :A: Aminu Dahiru ,the immediate past President of ANLCA, Prince Olayiwola Shittu, Deputy President General, MWUN, Comrade Harry Tonye and SSA  to the PG ,Comrade Leke Sanni.