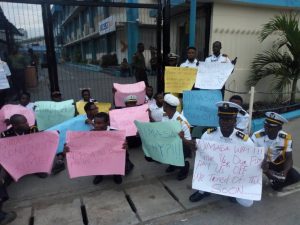 The cadets who arrived  NIMASA`s  headquarters Lagos gate  this morning said the agency has abandoned them for over three  years now after their graduation without any concrete arrangement for their sea time as promised by the agency after their studies.
They vowed to remain at the  NIMASA  gate until they receive a favourable word from the management on when they can have their seatime training.

It could be recalled that, the last regime at Nimasa under Patrick Akpolobokemi left 2500  NSDP cadets in various maritime institutions around the world.
It is also on record that the Dr  Dakuku Peterside`s  regime have  not engage any cadet for the program in the last three years .
The NSDP program was introduced over ten years ago by the agency to bridged  the gap of  qualified  seafarers need of Nigeria which is in short supply .
The program  was  formerly a joint sponsorship between NIMASA and some States government under a 60- 40 funding structure , until the agency embarks  on full sponsorship  of some of them.
The package also  have a  year  Sea time training  mandatory for cadets before they can secure employment in shipping companies.

One of the students who led the protest, Mr Onyankeke Sunday Adarigho, who spoke with  SHIPPING DAY  said  that all of them taking part in the protest had completed their three years classroom programme remaining the seatime training.
Adarigho said they have been waiting for about three years now to have the seatime training without success, adding that it has been one promise after another by the management.
He said that the protest will hold for one week, adding that they will not leave the gate of NIMASA until they get an answer.
“We came fully prepared. We came with food and three buses and we will not leave here until we get a favouorable answer from NIMASA”, he said.
Adarigho however added, “Same students that were sent to PIMSAT were later transferred to Perpetual yet the agency claims to have students in PIMSAT and in Perpetual. NIMASA never sent students to Netherlands. Year after year they’ve been claiming funds for our sea time training, yet nothing has been done, they succeeded in training 150 cadets in three years and they’ve turned down over 1000 bed spaces from different shipping companies and countries over the year. Our fate now is so slim yet on yearly bases budget is being passed for our training”.
Some of the placards read: “NIMASA Half Education is Dangerous  in Maritime. NIMASA.. We Need Our BSC. Pay Us Off”.
Reacting to the protest, the Deputy Director, Public Communications and Strategy, NIMASA, Mr Isichei Osamgbi said NIMASA has been sending cadets for sea time training in phases.
Osamgbi said the agency has not neglected any Unfortunately, people are praise singing Nimasa. Its on record that, the Dr Dakuku Peterside`s led Management  of the agency did not  sponsor any Cadet to the NSDP  in his three years in office apart from the 2500 NSDP cadets  he inherited from the last regime. Instead of seeing to their plights, they are jamboreeing  about making political statements. requiring sea time training, explaining that those who have not received their sea time training after the three years class room programme will be attended to.
He said that the training has to be in phases considering the number of cadets involved.