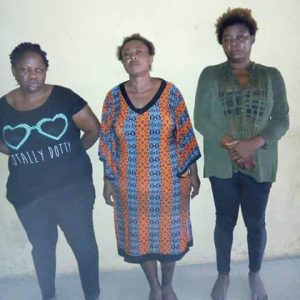 he Lagos State Police Command has smashed a syndicate specialising in trafficking and trading in children.
According to a release by
CSP Chike Oti, Police Public Relations Officer of the Lagos State Police Command,
`On the first day of May 2018, the Command received a complaint from one Nwoagbo Ekene of 27 Test Oluwale street, Olodi Apapa, that on same date, at about 1100hrs, his two year old daughter suddenly disappeared and all efforts made to trace her whereabout proved abortive.

`Based on his complaint, the Command Commissioner of Police, CP Edgal Imohimi, directed the officer in charge of the anti-kidnapping Squad, SP Musa Bulus to use all the assets at his disposal to unravel the mystery behind the disappearance of the little girl.

`Consequently, investigation was instituted and in the course of it, one Ms. Joy Okoye, 28, of No.64 Kirikiri street, Olodi Apapa was arrested in connection with the case and on interrogation, the suspect revealed that she and one Amarachi (surname unknown ), a female,who is still at large, stole the child and sold her for N300, 000.00 to one Ms. Uju Obieze who is 40 years old and resides at No.8 Okwe road, Asaba, Delta State`.

The statement further reveals the Police Detectives proceeded to Asaba and apprehended the said Uju on September 13, 2018.
Uju confessed to have bought the child from Joy Okoye, but added that the deal was done jointly with one Ifeyinwa Ezene, a female 46 years of No.2, Eze Bishop street, Onitsha, Anambra state, where Ifeyinwa Ezene was apprehended and she confessed to the crime by corroborating the statements of the other two suspects.
She also added that the child had been resold to one Ifeoma Okoye,a female, who lives in Enugu.

The trio led detectives to No.40, Amaechi street off Agbani road, Enugu, where, on September 14, 2018, the victim was rescued from the relatives of the said Ifeoma Okoye who were mourning her, having died a week earlier.
The police said the little girl has since been reunited with her parents.
Meanwhile, the suspects will be charged to court today , 3/10/2018.