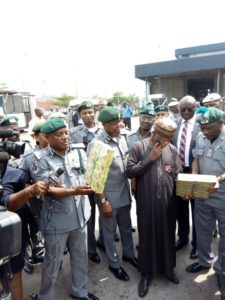 Despite the frontal war against illicit importation of banned and controlled food and drugs into the country by the Nigeria Customs Service (NCS), money bags and their foreign collaborators are pumping huge funds into the illegal business. 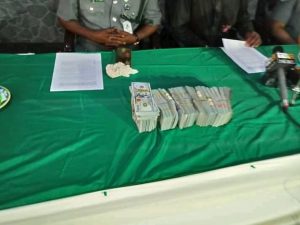 The bribe money rejected by Customs

The desperation by the importers who offered a whooping N150million bribe in Dollars denomination to Officers of the NCS at the Apapa Command and Federal Operations Unit, Ikeja, Lagos left more than meet the eyes of the cruel intentions of the importers.
The recent halt of 50 Containers of Tramadol imported to the Country at this period has become worrisome.

Last week, the Apapa Customs intercepted 40by 40ft containers laden with various grams of Tramadol valued at over N7.32billion. While the Tin Can Customs also seized another 10by 40ft containers of same drugs valued N3.134billion.

Tramadol is a controlled drug which is restricted to prescription and are allowed to be imported through permission from drugs regulated authorities.

According to Google Tramadol is sold under the brand name Ultram among others, is an opioid pain medication used to treat moderate to moderately severe pain. When taken by mouth in an immediate-release formulation, the onset of pain relief usually occurs within an hour. It is often combined with paracetamol.

Is tramadol a controlled substance?
For those of you who may have missed it, the Drug Enforcement Administration (DEA) has officially scheduled tramadol as a Schedule IV substance within the U.S. under the Controlled Substance Act, which will be effective as of August 18 of this year.ended-release tablets and capsules are only used by people who are expected to need medication to relieve pain around-the-clock.

What class of drug is tramadol?Tramadol extended-release tablets and capsules are only used by people who are expected to need medication to relieve pain around-the-clock. Tramadol is in a class of medications called opiate (narcotic) analgesics. It works by changing the way the brain and nervous system respond pains.

The National Drug Law Enforcement Agency (NDLEA) also said that the approved threshold for Tramadol is 50 and 100 milligrams of Tramadol tablets that are approved as prescription drugs and that any higher milligrams ranging from 120 and 250 are considered illicit.

Our findings also reveals that Tramadol are mostly taken by artisans and motorcycle riders most of them youths. The drugs according to our investigations are also in high demands among Nigeria neighboring Countries and mostly consumed by youths from northern Nigeria.

The high volume of the drug importation at this time of the year is also linked to the election season.
Ahead of the 2019 general elections coming up in Nigeria, indications of large scale security challenges have emerged with significant increases in the volume of psychotropic or mind bending drugs into the Country.

Political observers and medical science experts says that the coincidence of this increase with the beginning of campaigns should be enough cause for worry to the nation’s security apparatus whose hands are usually full at times like this with threats to election violence or outright violence.

A medical psychologist who spoke to our Correspondent said: “It is common knowledge that elections in Nigeria always come with the use of thugs and these thugs almost always operate under heavy influence of mind bending drugs and alcohol.”

He said these drugs have, therefore, come on time for use during the elections and urged the security agencies to be more vigilant and alert for not only more drug importations, but of impending result of the use of the drugs that may slip through the security apparatus.

The Customs seizure came barely one week after the National Drug Law Enforcement Agency (NDLEA) intercepted 340 million tablets of the same tramadol imported in 12 containers through the same ports.
The drugs seized by the NDLEA came in various dosages ranging from 120 to 250 milligrams.

If there is any agency of government in the President Mohammedu Buhari’s regime that has recorded tremendous successes ,it is the Nigeria Customs Service (NCS).

The Service in the last three years has been on top of its game in revenue generation, anti Smuggling actives and effectively implementing it’s policy mandates as enshrined in its Customs Excise and Management Act (CEMA).
The Colonel Hameed Ibrahim Ali (Rtd) led NCS is gradually putting up professionalism, integrity, service as well as intelligence with a combat ready stance to rescue the Nigerian economy from dubious and deadly business cartels who have over the years turn Nigeria into a dumping ground of fake, dangerous and killer products.
The interesting thing about the Hameed Ali’s administration is that he has brought out the best in Officers and Men of the service, while also discovering tested professional hands who are constantly raising the performance bar of the Service.
According to John Sutherland Bodell “No Man or Woman has achieved an effective personality who is not self – disciplined.

Such discipline must not be an end in itself, but must be directed to the development of resolute character”
This quotation represents the person and character of Comptroller Abubakar Bashir, the current records- breaking Customs Area Controller of the premier port of Apapa in Lagos State.
Comptroller Bashir can be described in the words of Brain Tracy ” Successful People are simply those with Successful Habits”, it seems everything is working in favour of Bashir.

Firstly, in just two weeks of his assumption of office at the Apapa Command in August , the Command recorded it’s first ever revenue height of N68,668,095,723.16 in August 2018 (highest in the Command’s history).

Astonishing too was the seizure of two aircrafts , one imported Cessna 182A from United States of America without end user certificate and another helicopter for exports with registration number SN-BLI. The helicopter was package in a container PONU7789246 and falsely declared as 388 bags of cashew nuts for exports.

These seizures which are first of its kind in recent times in the Service is commendable.

The patriotic zeal of the officers rejecting a whooping N150million bribe and a promise for more is most scarce in the country, especially at this yuletide season of the year. In fact we gathered that the Customs officers were promised N150m per container of the 40 containers and that they paid the first N150m to exit the first container which was intercepted by the Federal Operations Unit, zone ‘A’ who were also offered N50m out of the N150m bribe.

No doubt Comptroller Abubakar Bashir is not a novice nor a learner in customs process and procedures. He is thorough, intelligent, gifted and a very disciplined officer. He belongs to the hierarchy of classical Customs Officers who cannot be push around by favours, blackmail or ego.

He once told this reporter that from his childhood he always want to leave a legacy and add value to society whereever he found himself.

Bashir has brought that his childhood ambition to improve society into the Nigeria Customs Service.
His professional competent and developmental evidence are still very fresh at the Onne Command in Port Harcourt, Rivers State, where he did not only transform the Customs Command into a modern edifice, equivalent to a new generation banking house, but also instilled in the Officers and Men of the command the professional proficiency to master the Customs job as unbeaten professionals.
At the Apapa Command, Bashir in his first meeting with stakeholders mandated them to gear up for 48 hrs clearance as his target. He as usual heap on importers and their Agents for total compliance to the goods clearance procedure for smooth activities in the port.
It is worthy to note that in less than four months of his tenure at the premier command, Bashir has already developed a remolding architecture for the Customs building at Apapa. The new edifice masterplan which was sigted by our Correspondent is a masterpiece architectural plan will not only stand out the Command as the premier command, but will change the working atmosphere of Officers and Men of the Command.
Again as he did in Onne Command, Bashir is to use private sector funds to carry out the reconstruction of the Apapa long room building in the 2019 fiscal year.
For the NCS, the Hameed Ali regime has really brought out the patriotism, professionalism, discipline, dedication, call to duty and intellectual capacities of Officers and Men of which Comptroller Abubakar Bashir is one of them.

Barely 24 hrs of witnessing the 40 contianers of Tramadol intercepted by the Apapa Customs Command which was supervised by the Comptroller General of the Customs, Col. Hameed Ali and some senior officers of his management team, the Tin can Island Command of the Service was also on standby to showcase it 10by 40ft containers halt for the same product.
The CG who was represented at the briefing by Deputy Comptroller General of Customs (DCG) in charge of Enforcement, Intelligence and Investigations, Augustine Chidi added that two containers of used clothings and one other of harmful bleaching ingredients were also seized.

Speaking further, Alli said the seizures were in line with the provisions of the Customs and Excise Management Act (CEMA) CAP C45 LFN 2004, Sections 46 and 161.

“The Tin Can Island Command has rejig its operational methodology to deal with the trend and with the renewed vigour has yielded positive results positive results particularly in dealing with issues of under payment, under valuation, value transfer, concealment, falsification of documents among others.The seizures include the following; 11×40 and 2×20ft containers of Tramadol, Ciproflaxin capsules, Diclofenac Sodium Tablets, Soffeathe IV Cannula, Sildencfil Cotrate Tablets, Bleaching Soaps, Bales of used clothing with a total Duty Paid Value (DPV) of N3,134,029,290.00

“In the same vein, a container of soap suspected to contain harmful bleaching ingredients and two containers of second hand clothings were seized in line with the provisions of CEMA.

In line with the presidential directive on the ease of doing business at the ports, the Comptroller General called on relevant security agencies to continually work for the overall interest of the country, in achieving 48hours cargo clearance timeline

He also warned that the service will apply very strict sanction on any act capable of jeopardizing the efforts of the service as achieving better efficiency in the discharge of its mandate.