Home » Maritime » JOURNALIST Raise Alarm Over State of In

JOURNALIST Raise Alarm Over State of In 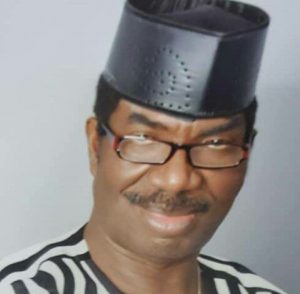 A veteran maritime journalist and Board of Trustees Chairman (BOT) of Association of Maritime Journalists of Nigeria (AMJON) Elder Asu Beks has raised fresh concerns over the increasing insecurity in Nigeria ports and border stations.

Asu Beks who is also the publisher of Shipping World Magazine in a press release obtained by our Correspondent said ” I have invited you today to share some thoughts with you at the alarming state of insecurity at our ports and border posts and how as responsible citizens we could partner with the relevant authorities to secure our great country.

“You may recall that over 12 years ago that when the debate on the pros and cons on the planned concessioning of Ports Terminals was being muted, Labour and the maritime media then called for caution.

These seeming fears were predicated on the fact that the incoming Terminal Operators may compromise on our national security.Today, those fears have been largely confirmed as arms and ammunition and the influx of illicit drugs into the country have climbed to an unprecedented level.

Last year alone, no fewer than 2700 pump action rifles were impounded by customs authorities in Lagos alone .Interestingly most of the imports came from Turkey and yet no diplomatic efforts were made to dissuade the Turkish government from engaging in such unwholesome practices”.

He said in the last four weeks ,no fewer than 59 containers laden with tramadol and other forms of hard drugs were seized at Apapa, Tin Can and Owerri.Even though we commend the officers who made these landmark seizures .

“we are nonetheless worried at the quantum of the same imports which may have missed the eagle eyes of Customs officials. WE are also worried that the identity of these importers are still shrouded in Secrecy.

My painstaking investigations have revealed that Customs Officials are working under the most severe and harsh conditions with barely enough tools with little or no motivation from the Customs authorities in Abuja.

With no scanners at the ports and border posts coupled with obselete guns,it would seem that smugglers and other forms of economic saboteurs are having a field day.

Our borders have become even more porous than ever before in our recent history as arms and ammunition and illegal immigrants move freely across borders unchallenged.

On several occasions, Customs officers at border posts have been gunned down by dare devil smugglers and armed insurgents with little or no resistance. Other security agents have done little or nothing to complement Customs and Immigration officials who are usually at the mercy of cross border criminals”.

On the STATE OF EMERGENCY at the PORTS AND BORDER POSTS. Asu Beks said the situation we have on ground might compromise our entire national security if something urgent is not done.

“We hereby call on President Muhammadu Buhari to declare a State of EMERGENCY at our Ports and Border Posts to draw attention of all relevant agencies on need stop this army of invaders.

Consequently, we hereby urge relevant authorities to subject all imports to 100 per cent physical examination at our ports and all entry points including airports and land borders.This is a very difficult pill we have to swallow as a people but no serious country would sit and watch as armed cross border bandits and enemies of a free world attempt to challenge our sovereignty as a nation .
Also, on the MANAGEMENT OF OVERTIME AND SEIZED GOODS, he lamented that most of the government warehouses in major customs commands are unable to cope with the influx of impounded items .As according to him goods, mostly cars running into billions of naira have been allowed to rot away.

“This is due to Hameed Ali’s refusal to comply with extant laws on the disposal of such goods.He had ignored the role of government appointed auctioneers as well as the powers of Customs Area Controllers which vested on them the powers of disposal as prescribed in the Customs and Excise Management Act(CEMA).”
Asu Beks also pass a VOTE OF NO CONFIDENCE ON HAMEED ALI saying “We must accept as a nation that it was wrong in the first place to appoint a politician rather than a career officer to run such a highly technical and professional body as the Nigeria Customs Service. More than three years on, Hameed Ali has performed abysmally. He has failed to promote professionalism and discipline in the service leaving most officers to seek self help Officers sent on official assignments or those on transfer are denied their allowances and other entitlements. Corruption has reached an unprecedented height as promotion and juicy postings are usually on recommendations from prominent emirs.I want to use this opportunity to call on President Muhammadu Buhari to immediately appoint a serving career officer to head the Nigeria Customs Service as Hameed Ali lacks the cognate professional experience and competence to lead the Service This will surely restore the lost glory of the service and instill accountability, professionalism and boost morale of officers and men of the Nigerian Customs Service “.