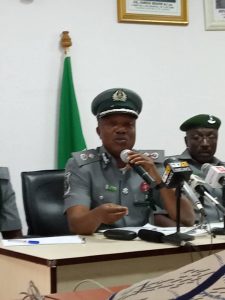 The  Nigeria Customs Service is compiling  the names of registered Orphanage  homes and other  IDP camps accros the Country apart from the ones in the North East to distribute  relief  materials including Rice  and other edible items.

The Service  National  Public Relations  Officer, Deputy Comptroller  Joseph Attah disclosed this today to Journalists in an  end of the year breakfast  meeting  with the media men in Lagos. .

Attah who was accompanied  by some Commands   PROs from zone A also said that the  NCS recorded a total of 4,010 seizures  with  a Duty Paid Value  of N40billion during the same period.

DC Attah also said that the experience of the Service in the outgoing year have shown that with robust stakeholders engagement, enhanced automation and strict implementation of the imports  and exports  guidelines, the service can generate more revenue and effectively suppress smuggling to the bearest minimum in the Country.

In fact, smuggling is not just a crime, but the mother of many crimes and criminalities. violent crimes are perpetrated with dangerous items such as arms and drugs smuggled into the country. Apart from its negative impact on national economy, smuggling has devastating effects on security and well-being of any nation.” he said.

Adding that the more the Customs Service intensified efforts in combating smuggling, the more confrontation they get through porous borders, non cooperative attitude of some border dwellers, readiness of some citizens to help the smugglers mob customs operatives, lack of proper implementation of the ECOWAS protocol on transit by the neighboring countries and the use of motorcycles and animals to smuggle through difficult terrains.

On the disposal  of seized  items, the Customs imagemaker  said a total of 806 vehicles were uploaded  on the  Service  e-auction platform          app. trade. gov. ng/eauction out of which 753 winners emerged and a total sum of N346,146,349 have been generated through  the e-auction  sells. According  to Attah the platform  is open from Monday  to Wednesday  by 12noon every week.

On the disposal  of rice and other edible items by the Service the Customs spokesman said   a total of 424,391 (50kg) bags of rice worth N4,047,615,000 and other seized perishable  items  were distributed  to the IDP camps in Borno,  Yobe,Adamawa  and Edo States. Stating that with the relative peace   in  the North East and the IDPs  returning  to their ancestral homes and engaging in farming, the need for the  items  by the  IDPs  will reduce, while continuous seizures   by Customs increases as such it’s demands extensive distribution.

Attah said to this end “The CGC  has therefore sought and obtained  a Presidential nod to extend  the distribution  of these items to other IDP  camps and registered  orphanages across the Country. Already lists of IDPs and orphanages in  the Country  are being  compiled with a view to kick -starting the distribution as soon as possible” Attah said .

It could be recalled that the Customs intercepted  59x40ft containers of Tramadol and other controlled drugs from three of its Commands of Apapa  40 containers, Tin Can  Island 10 containers  and Port Harcourt  Area II,   Onne, 9  Containers.

Attah  said the establishment  of the Customs Police Unit whose job is to check acts of undiscipline  and other vices not- in- line with  the ethics of the Service is fast turning the Service  into  a national  example  for service  delivery.