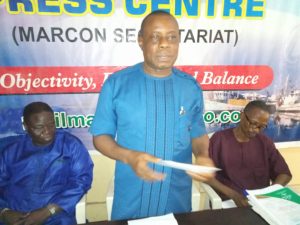 The Importers Association of Nigeria (IMAN) has kick -started the collection of its membership tolls accross the Country yesterday beginning from the premier port of Apapa.
In a press briefing with maritime journalists at the Nigerian Maritime Press Centre also known as Association of Maritime Journalists of Nigeria (AMJON ) Secretariat , the National Secretary of the IMAN Board of Trustees (BOT),Hon K.C Chikezie said that the levies collection from IMAN members has become imperative so as to take proper care of all IMAN members welfare as well as to join the federal government security agencies to checkmate influx of dangerous and substandard products into the country.

Chikezie who went through memory lane on how the the IMAN came to being, registerd as a body and mandated to carry on with its legal activities said the body has consulted widely with all its stakeholders before taking the decision.
He said the BOT has delebrated on the issue and agreed for the tolls to be collected.

On the mode of collection, he said IMAN has printed it’s receipts and has assigned Prosper Integrated Logistics Limited in collaboration with Flight Prompt Aviation Services Limited as collectors of the IMAN tolls.
The IMAN BOT scribe also said that they have gotten approval from the Nigerian Ports Authority (NPA) and other relevant federal government ministries to effect the collection, adding that all the freight forwarding associations have also signed their approval of the collection.

In a calleberated toll levy to be collected by IMAN a 40ft Container and it’s equivalent will payN5,000,while a 20ft will pay and it’s equivalent will pay N2,000.
Others are trailers from the borders will pay N10,000, half bodies trailers from the border N,5000, imported cars, either from the borders or seaports N1,000 and imported vehicles other than cars from borders or seaports N2,000.
The body also levied bulk cargoes of cement, fish fertilizer, rice, salt, iron ore, petroleum products etc with vessels 1-10,000 tons capacity to pay N10 per ton, bulk cargoes of vessels 10,001-20,000 tons capacity will pay N5 per ton and airports cargoes N3 per kilogram.