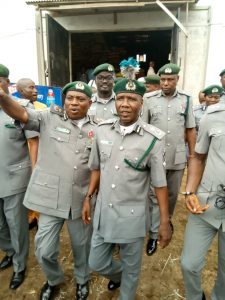 The Nigeria Customs Service has continued it’s anti -smuggling war on economic saboutours this new year with one of its Border Command recording huge seizures of various banned items.

The Seme Border Command of the Nigeria Customs Service yesterday said it intercepted 11 trucks load of rice containing 6 , 753 bags with 45 kegs of foreign groundnut oil smuggled into the Country from Benin Republic. 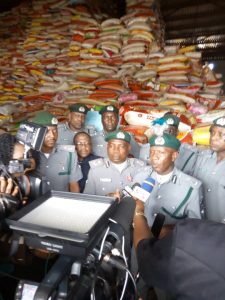 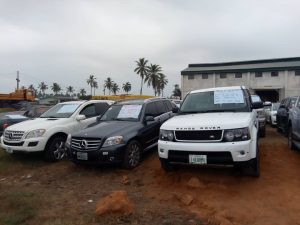 Some of the seized vehicles

In his words “ Twenty two fairly used vehicles and six means of conveyance have also been seized . Notable amongst them are Toyota Coaster Van ( 2014 model ) , Toyota Land cruiser Prado ( 2011 ) .

Uba however said the total Duty Paid Value of the seized rice was N 158 million , while that of 45 kegs of vegetable oil was worth N 573 million w
He also disclosed that the command seized 91 parcels of hard drugs which has been handed over to the National Drug Law Enforcement Agency ( NDLEA).
He was optimistic that the command ’ s revenue for 2019 would be surpassed with the inauguration of a Joint Border Post which has made it mandatory for only one single entry and exit to and from both Benin Republic and Nigeria.
He harp on the media to enlighten the public on the dangers of smuggling and to educate them on exportation of exportable products which is zero duty and lucrative for those who engage in it.