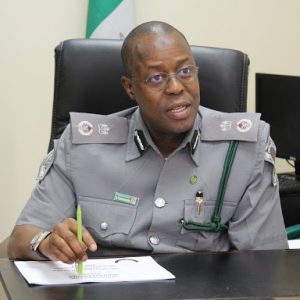 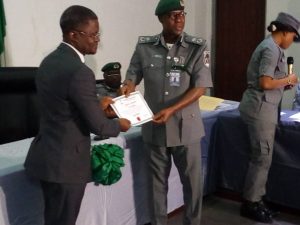 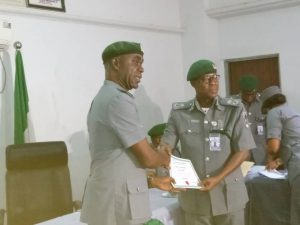 Comptroller Bashir presented the awards to them during his maiden press briefing with journalists for the 2019 to showcase the Command’s performance in the 2018 fiscal year. 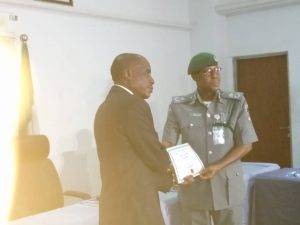 According to him “The year under review also achieved high level of compliance on exports declaration, while about 2500 containers were blocked and forced to comply with the requisite guidelines ”

On anti smuggling feats a total of 72 containers of various goods such as used spare parts, used tyres and other sundry items Valued at N9.626 billion was seized in 2018.

The Controller said: ” In the year under review, the command also seized and condemned 41 of 40ft containers or controlled pharmaceutical drugs including tramadol in excess of the allowable milligrams with Duty Paid Value (DPV) N8.812billion.

“Furthermore, the command also intercepted and seized one exports bound used helicopter with registration number 5BN valued at N210.6 million and another import bound Aircraft “Cessna 182A” in CKD with serial no. 3400 valued at N486.9 million was also seized in accordance with the provision of the extant laws and guidelines.

“All these itemes were seized owning to various infractions such as false declarations, concealment and complete disregard to import and export guidelines,” Abubakar said.

Bashir attributed the successes of the command in the previous year to the selfless stance of Officers and Men of the command and also with the support and backup of the CGC, Col Hameed Ali (rtd) and his management team.

He said that the other strategies the command adopted which lead to the success includes instance on seamless operation of the imports and exports businesses by his administration.

He further explained that he introduced 24-hour disputes resolution team and one spot examination at all Units and agencies.

The strategies such as advanced system and monitoring, collaboration between internal and external units of the Nigeria Customs Service (NCS), and other government agencies are also the tonic that help the command attained the various feats.

He said the implementation of these strategies had helped to block most revenue leakages and enhanced trade facilitation and security in the Command.

He noted that the command achievement in 2018 earned it the World Customs Organisation (WCO) award during the WCO day in January 2019.

The Apapa Customs boss however urged stakeholders to continue to corporate with Customs by adhering strictly to the extant laws and guidelines on imports and exports for the collective goods of our nation.