Home » Maritime » Customs » No Passenger died, but Friend of the Customs- NCS Spokesman

No Passenger died, but Friend of the Customs- NCS Spokesman 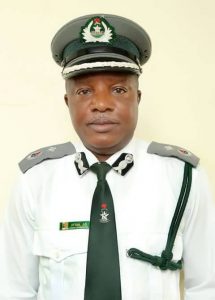 The Nigeria Customs Service (NCS) has reacted to a video going viral on the social media today alleging an officer of the Customs killing a bus passenger because of refusal to pay N5000 bribe.
The video which shows a white bus belonging to one of the major transports companies viewing the passengers of the bus screaming after an officer of the customs open fire on one of them.
A woman was seen in the video screaming “because of N5000 you kill somebody ”
The Customs officer who allegedly pull the trigger was also seen in the video been beaten as a reprisal to the allegedly death passenger.

But in a swift reaction to the unfortunate incident, the Customs Spokesman, Deputy Comptroller Joseph Attah in a statement said no passenger died, but rather a friend of the officers in that post lost his life.
The statement reads,
“The attention of Nigeria Customs Service has been drawn to a disturbing video going viral with conflicting narratives.
While it is painful and totally unnecessary to loose life in anti-smuggling operations, today at Shagamu interchange along Ijebu Ode, attempt to obstruct lawful performance of duty by passengers of a commercial bus (a white Toyota Hiace) suspected to be carrying bales of used clothing led to the death of a young man (Godwin) and serious injury of a Customs Officer, ASC1, Destiny Onebamho.
“Contrary to some narratives, the young man was not a passenger of the bus but a good citizen who always come to fetch water for Customs Patrol men anytime they return to the base.

“Preliminary finding indicate that it was during the skirmishes and struggle to disarm the Officer that the riffle discharged and hit the friend of the Customs (Godwin) who lost his life. The Service is already in touch with the bereaved family.
“Sadly, it should be noted that while attention shifted to the dead and the wounded, the passengers who filmed with inciting commentaries boarded their vehicle and left, leaving the wrong impression that it was one of them that was killed.
While the wounded Officer is under intensive care at the hospital, the patrol team has been recalled to the office for further investigation”.