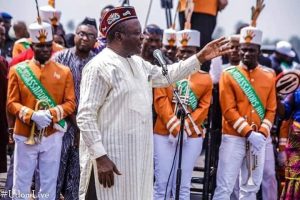 The inaugural flight touch down at the Victor Attah airport yesterday in Uyo with dignitaries onboard including former governors of Akwa Ibom State, Victor Attah, Idongesit Nkangha, the Senate President, Bukola Saraki and Governor Udom Emmanuel among others.

In his remarks, Attah said: “I thank God that we have Governor Udom Emmanuel who has deemed it necessary to execute the project we started years ago. I was accused of running the government like a business but I am happy that Udom Emmanuel is running the government like a business. “Today we have in front of us the beginning of something that will bring economic development to the state. ” 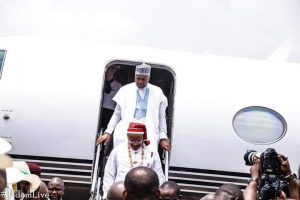 Unveiling the two Aircraft, Saraki, said: “Today, we celebrate leadership, we celebrate the good things that can come out of Nigeria, we celebrate the audacity of hope. The governor has created an environment for people to have jobs. We are proud of you in the PDP family.” 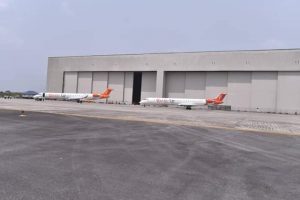 Also speaking Governor Udom Emmanuel described the airline as a monumental achievement for the state and Africa in general. According to him, the 6-year-old Aircraft, with a sitting capacity of about 90 persons also constitute the newest and modern fleet of the Canadian Airbus. He, however, expressed his administration’s commitment to ensuring that the Ibom deep seaport commences operations before the end of his second term in 2023. He said:” 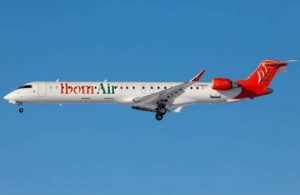 The journey to achieve Ibom Airline started in 2016 and today, it is a reality. If we were to search the minds of people, this day would have been frustrated but we give glory to God for making this day a reality.

“I want to charge my people that we can achieve a lot if we come together. “As at today, we have done a lot more in terms of the road network. We have done even more than the Federal Government has done. “We are not only developing a deep sea port.

I want to reassure Akwa Ibom that before the end of this tenure in 2023 we will launch one of the most digital seaports in entire Africa “How can somebody say a state like Akwa Ibom has not commissioned any project in the past three years?

Let Akwa Ibom people rebuke such people. This is not a time to destroy what we have” The Technical Consultant of Ibom Air, Mfon Udom disclosed that the third aircraft will arrive in the state on Friday, and another one in August this year.

He said, “The project commenced about three years ago and has been made possible by the governor. Ibom Air is one of the vehicles to drive Akwa Ibom economy and growth.’’