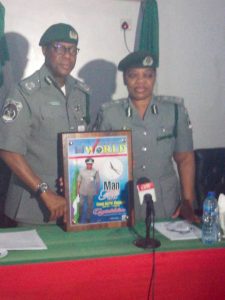 The common saying that “When the going gets tough, it is men of Character that gets going” best describes the winning tricks of Comptroller Abubakar Bashir, the present Customs Area Controller of the Apapa premier port Command.

As a seasoned and grounded Customs officer he knows his onions and how to propel the administrative tricks to persuade his sorbordinates to work for the overall glory of the Command and the Nigeria Customs Service as a whole. 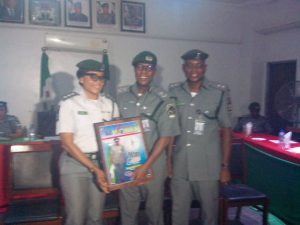 Bashir has justified his redeployment by the Comptroller General of the Service, Colonel Hameed Ibrahim Ali (rtd) from the Onne Customs Command to the Apapa Port. He has also proven skeptics wrong who might have doubted his ability to administer the premier port for greater efficiency, trade facilitation and huge revenue generation from the command as expected of him. 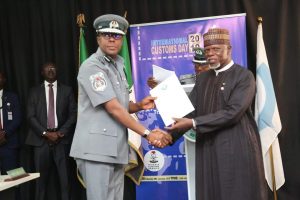 As the flagship of all Customs Commands in Nigeria and overseeing the biggest and besist port in West and Central Africa, any Comptroller send to this port must be next to a genius in not only customs parlance, but International trade conventions and laws and should be able to deploy it to the full advantage of the Country’s benefits. 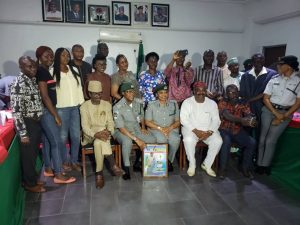 But what difference has Abubakar Bashir make that stands him out as an “Award Winning Personality”?
Let’s dig deep into his less than one year stewardship at the Apapa Command.

Upon his resumption of duty in July 2018, Bashir score his first record breaking revenue in the history of the NCS and the Apapa Command in August 2018, when the Command Collected a whooping N65billion.

Another history was made by Bashir in November 2018 when the Command intercepted 40by 40ft Containers of Tramadol and other controlled drugs valued at over N70billion .

Also, for the first time, two aircrafts were also seized by the Command during that Genius Book of records anti smuggling rampage by the Command.

Crowning it all with a rejected N150million exhibit in United States of America Dollars denomination, which was part payment as bribe to allow the Tramadol drugs out of the ports.
The Command collected the highest revenue of over N245billion in 2018 .

On his administrative prowess, since Bashir arrived the Premier Port, things are no longer the same. He once said in a chat “We must all try to salvage this Country, no one will do it for us, let us try to practice doing the right things and this Country will change for the better.

Everything is not about money, you can go round and asked I have not asked anybody to bring money to me, let’s do our work and you the journalists please tell all the stakeholders to be compliance and things will work better for all of us”

No doubt Abubakar Bashir’s patriotic performance has not gone unotice as its has attracted both International and Local commendations including awards and goodwills.

In just seven moths of his stewardship at the Apapa Command, Bashir has received many awards, in fact he has rejected so many that has out numbered the few he accepted.

So it was not surprising today, when the management of the famous Shipping World Magazine led by his Chairman, Elder Asu Beks with other media practioners, Officers and Men of the Command roll- out the drums to bestow on Comptroller Abubakar

Bashir the “Integrity Award”.
Asu Beks confess that for Bashir to reject N150million bribe at this time and age is unfathomable.
He said Bashir has proven that his integrity is more than million loaves of bread.

Suffice to say that the Hameed Ali’s carrot and stick approach to rewarding and punishing erring Officers has really brought out the best in officers and men of the NCS.

For Comptroller Abubakar Bashir, it is your time to rise and shine, proving yourself with the training and stuff you are made of. Having ignited the fire power of due diligence, professionalism and patriotism as a mark for more proactive and service oriented Nigeria Customs Service.
Once again Congratulations
“Man of Integrity”