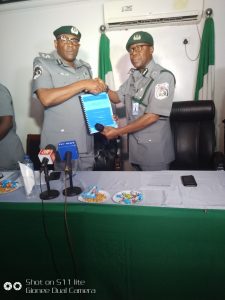 The Nigeria Customs Service (NCS) management has added another Assistant Comptroller General to its team, he is ACG Abubakar Bashir .Untill yesterday Bashir was the Customs Area Controller of the Apapa premier port in Lagos State.

Bashir who was promoted to Acting ACG recently handed over the Apapa Customs Command yesterday to Comptroller Mohammed Abba Kura who was formerly at the Zone A, Post Clearance Audit (PCA). Abba Kura has now resumed as the new Customs Area Controller of the premier port.

Bashir Abubakar resumed duty at the Apapa port from Onne Command in August 2nd 2018 and has serve for just seven moths before being promoted to the management rank of ACG.

Briefing Journalists during the handing and taking over ceremony yesterday, Bashir said the Command recorded a whooping N60,109,247,444 as revenue between January and February 2019.

The outgoing Area Controller also reveals that the command intercepted 24 containers laden with tomato pastes and vegetable oil with a duty paid value of N200,867,124.00 within the period.

The new Acting ACG Bashir who is now in charge of Customs Board said the Apapa Area Command records the highest revenue collection in the Nigeria Customs Service and is equally the biggest port in sub Saharan Africa which always serves as a target point for any government fiscal policy implementation.

“This commendable collection is achieved even with the full in business activities due to high expectations on the 2019 general elections,” the outgoing Controller stated.

He called on officers and men of the command to cooperate and support his successor.

While responding ,incoming Area Controller,Comptroller Mohammed Abba-Kura assured stakeholders in the industry of revamping the monthly meeting which had been stalled for a while.

Abba-Kura assured that the service would continue to put in place measures that will encourage revenue drive and trade facilitation.
He also urged the outgoing Controller to work harder in the new position in achieving greatness.