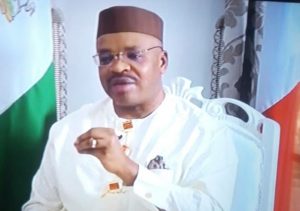 Ibom Air, the Akwa Ibom State owned airline will commence commercial flights across Nigeria before the swearing-in of Governor Udom Emmanuel for his second term administration on May 29, 2019.
Also, the General hospital Equita in Oron, LGA, Immanuel General hospital, Eket, Awa Cottage hospital and some roads under construction are also billed for commissioning before May 29th, 2019.

The good news was stated by the Akwa Ibom State Commissioner for Information and Strategy, Charles Udoh. He disclosed these earlier today in Uyo while appearing as Studio Guest on a Live Planet Radio 101.1FM programme – Akwa Ibom Mandate.
The State Information Commissioner said, this is an indication that, Governor Udom Emmanuel is very committed to the development of Akwa Ibom State, as the day-to-day running of government as well as all development processes of government in all sectors, were still on course throughout the period of electioneering campaigns for the second term in office of the Governor.

On insinuations that, government funds were ploughed into the electioneering campaigns, Charles Udoh wondered where the funds sunk into the projects soon to be commissioned came from, emphasizing that, Governor Emmanuel is a trusted and committed leader of repute with sound financial expertise and strong sense of prudence and accountability, who holds in high esteem his track record in the banking sector and corporate world.

According to the state image manager , the Governor having attained such a height in the global community with numerous awards of recognition and accolades will not smear his integrity and trail blazing success story but will continue to uphold his virtues and commitment to delivering on project Akwa Ibom anchored on sustainable development.

He said, “True to his avowed pledge to making Akwa Ibom a reference point in industrialization and development as well as a destination for visitors and tourists, Governor Udom Emmanuel has put in place the enabling environment to attract aspiring investors to the state.

“To this end, the government is working assiduously and gearing huge resources into the maintenance and utilization of all necessary public utilities and facilities like the Nest of Champions, the Victor Attah International Stadium, the up-coming Four Point by Sheraton, the provision of power and good network of roads like the ongoing construction of ring roads along Oron road and Aka – Nung Udoe for the convenience of visitors and investor to the state” the Commissioner added.

Udoh reiterated that, the just concluded UEFA Champions League Trophy Match played here, was a clear testimony of the state fast becoming a destination of choice in global reckoning as Akwa Ibom was picked along- side Lagos as the only 2 states in Nigeria for the friendly football tour.

On the dividends of the UEFA match tour in which the Information Commissioner, Charles Udoh was lined-up among the players, he said, there was increase income to the state as the footballers and other team officials paid for their hotel expenses and food, transporters to and from the stadium, made money from their transportation services and Akwa Ibom products were patronized such as raffia work.

With the elections won and lost and with the state inching into another four years of massive development under the 8 point completion agenda, the Information Boss reminded the people that, about 26 industries will be in operation with numerous employment and job creation opportunities and called on all to come on board and join hands with Governor Udom Emmanuel to build an Akwa Ibom State we will all be proud of for posterity and future generations.