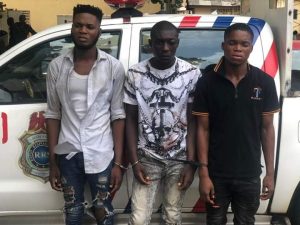 The operatives of Rapid Response Squad (RRS) have arrested two ex – convicts and one other suspect for robbery in Lekki Phase, Lekki area of Lagos State.

The robbers, one of whom was released from Oke – Kura Prison, Kwara State on Friday, April 26, 2019, was re – arrested on Monday in Lekki, Lagos, along with his colleagues after robbing a 25-year-old lady in Lekki Phase 1.

According to the suspect, Emmanuel Michael, 20 years old, “I was released from Oke – Kura Prison, Kwara State on Friday. I was imprisoned for almost four years for man slaughter.

With the assistance of my brother. I travelled down to Lagos and landed in Alaba Rago, Ojo. It was in that ghetto I met Mohammed Abubakar, who said I should accompany him to Lekki”, he explained.

“He paid all the transport fare from Ojo to Lekki. He didn’t tell me he was coming to rob. He only told me to play along with him”.

Another suspect one Mohammed Abubakar, 25, who is also an ex – convict, while pleading for leniency, stated that he invited Emmanuel Michael and Simeon Michael, 27 for a “Student Parole”.

“We were on “student parole”. We saw the lady and our interest was to scare her into parting away with her mobile phone. We told her we were Aiye Cult members and that the colour of her dress gave her out as rival cult member”, he said.

He added, “I told Emmanuel to confirm if she was truly a member of rival cult member. I thereafter threatened to kill her on that spot if she didn’t co-operate with me.

Itook her phone and asked her to go and get us drinks.

She left to get the drinks and we took to okada and bolted. Unfortunately for us, we did not know that RRS team were patrolling the area. She called for help and chased us on ‘okada’. They caught up with us at Lekki Phase 1 Gate and this was where the police arrested us”.

“In all honesty, we are not cult members. We only use that code to dispossess her of the phone she was holding. What we did is common among teenagers raised in Alaba. It is called ‘student parole’, he added.

Abubakar who is a stylist was arrested in Maryland, Lagos in September, 2018 for robbery. He was released in December, 2018 from Ikoyi Prison.
“It is the source of my livelihood.

I have operated in Lekki, Agege, Bariga, Shitta, Okoko, Maryland e.t.c”, he stated.

The Lagos State Commissioner of Police, CP Muazu Zubairu has directed that RRS Decoy Team comb all areas where the robbers operated while the suspects have been transferred to State Anti Robbery for further investigation.