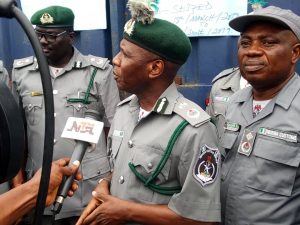 The Nigeria Customs Service, Seme Area Command has again showcase it’s anti- smuggling prowess in the last one month to continually drum it’s unrelenting efforts in tackling smuggling activities in the area.
The command also said it has collected the sum of N2,627,149,100.21from March till date.
While also intensifying operations of the enforcement unit to drastically reduced smuggling activities to the barest minimum. 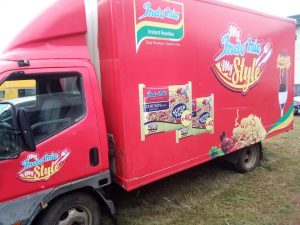 Others are 71 Cartons of expired food seasoning, N458,109,
336 Cartons of alcoholic drinks N4,776,525,
1,582 parcels of Cannabis Sativa concealed in an Indomie truck; and another notable arrest of 55 parcels of another Cannabis Sativa concealed in a Sienna bus.
A total of 1,686 parcels were arrested with street value worth of over N30 million for the period under review.

Comptroller Uba also said ” as part of our community service, the Customs Comptroller General, directed that a total of 25,000 bags of foreign parboiled rice (equivalent of 42 trailers), 650 bags of Sugar, 150 cartons of tin tomato, 150 bags of flour and 250 kegs of vegetable oil were transferred to the Nigeria Army Corps of Supply and Transport (NACST) between the month of April and May, for onward delivery to Yobe state government, Damaturu for distribution to IDPs in the state.

“It could be recalled also that some orphanages based in the Badagry region benefitted from relief materials as distributed by the Sub-Committee coordinating the distribution of Relief materials earlier in the year. Some of the homes are Hephzibah Homes Orphanage, Lady Atinuke Oyindamola Memorial Home for the Mentally Challenged, So-said Charity home etc”.

Comptroller Mohammed Uba Garba confirmed that six suspects were arrested during the period under review. He further re-emphasized the command’s determination to detect, arrest and prosecute those who fail to comply with the extant regulations; as their failure will be a cause for regret.
He called on patriotic citizens to support the command by reporting any smuggling activities or any relevant information that will assist the Command in discharging its statutory obligations.
He added that the command aims at assessing modern communication tools to improve cross border efficiency along the corridor in facilitating border crossing for the promotion of regional integration towards simplification, standardization and harmonization of border crossing procedures thus achieving the core mandate of the service.
This is coming at the heels of efforts by the Customs high command for customs-to-customs inter-connectivity between Nigeria and Benin Republic which will revolutionize Customs operations at the border post.