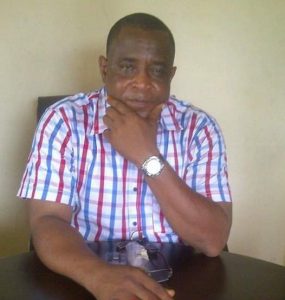 The death of Chief Ubon Jimmy Akpan, an accomplished Journalist hit the airwaves unexpected. Though, he was admitted for a surgical operation for pancreatic cancer at the Lagos University Teaching Hospital (LUTH), the operation was successfully done and he was recuperating, we thought the worst is over and that our dear Ubon will soon be on his feet again, to join us in the field of maritime journalism of which he was a guru.

Sadly, our expectations were cut short, when on Thursday morning, 20th of June 2019, the unwanted news of Ubon’s death hit the maritime community like a thunderbolt, up till now, is still like a dream.

We have all thought the worst is over and that Ubon will live to tell the story and show gratitude to all his media colleagues, friends , brothers, sisters and other stakeholders who show him love by prayers and financial donations to make sure he lives again.

Unfortunately, Ubon never lives to tell his story. And so the courageous and accomplished journalist, Ubon Jimmy Akpan “kick’s the bucket,” leaving us in the pool of tears uncontrollably.
Such is life, Ubon the one that calls me “Oroky Oroky” is no more, he’s gone to meet his creator who knows it all.

Though, tears is still rolling down our eyes, but we are consoled with the fact that late Ubon was a professional and upright man, who fought and stood for the truth no matter the circumstances.
He was a compassionate fighter for the fairness, equity and justice.

Professionally, he was ethical personified for rules and regulations that guards the journalism profession.
He may not have gotten enough time to proof himself, but the little time he uses, Ubon have proven his worth and has left his indelible marks on the sand of time.

In a Press statement issued by his Committee of Friends and signed by Elder Asu Beks, who is the forerunner in ‘Save Ubon Akpan’s Life’ campaign to officially announced his passage unto glory, it reads.

“With gratitude to the Most High and Giver of life, we announce the passing of our dear friend, brother and colleague, Chief Ubon Jimmy Akpan, who exited this realm in the early hours of Thursday June 20, 2019. He aged 56.

He had a distinguished career as a practicing journalist with over 33 years experience in major media organisations, including The Punch and Champion newspapers. Although he covered many beats and served as state correspondent in a number of states, it was in the maritime industry that he excelled and found fulfillment as he transcended the reportage of the maritime beat to become an entrepreneur in the shipping industry.

“In 1996, he teamed up with some close friends – Asu Beks, Emeka Okoroanyanwu, Alban Opara and Pius Mordi to co-found Maritime Publications Limited which pioneered the publication of specialised journal through Maritime Quarterly magazine.
Reputed for his boundless energy, candour and commitment, Ubon Akpan was also a former president of the Maritime Reporters Association of Nigeria (MARAN) and a founding member of the League of Maritime Editors.

“Akpan was also devoted to his community and worked assiduously for the uplifting of his people. He was a one-time president of the Ibiono Ibom Welfare and Development Association (IWADA) in Lagos among various capacities. He also served in the executive council of the Akwa Ibom State Community (AKISCOM), Lagos branch.

His early education began at the famous Hope Waddell Training Institute, Calabar from where he proceeded to The Polytechnic, Calabar where he obtained a Higher National Diploma (HND) in Mass Communication. He went to University of Ibadan where he completed a program in Masters in Communication Arts (MCA).

“Witty, boisterous and outspoken, Ubon as he was called by his friends and colleagues longed for a better Nigeria welcoming to entrepreneurship, a factor that made him shun paid employment to actualise his dream of being a genuine stakeholder in Nigeria’s shipping industry.

He is survived by his wife Esther, children and siblings.
Burial arrangements as announced by his family”.
May his Soul Rest in Peace,Amen.