…As Dakuku Calls on Men to Support Women achieve Objective 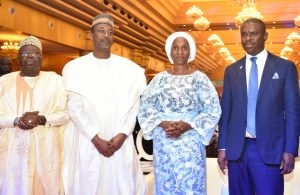 The First Lady of the Federal Republic of Nigeria, Dr. Aisha Buhari, has disclosed that President Muhammadu Buhari is determined to provide platforms that will encourage more women’s participation in maritime sector to boost economic development.
The President’s wife stated this on Tuesday in Lagos at an event to mark the 2019 Day of the Seafarer, with the theme, “On Board with Gender Equality.” 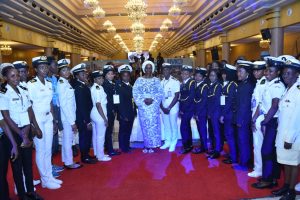 According to a press statement issued by the Head, Corporate Communications of NIMASA, Isechie Osamgbi at the end of the event, said the International Maritime Organisation (IMO) chose the theme, which resonates with its theme for this year’s World Maritime Day, to highlight the contributions of women in the maritime industry and encourage more women to go into the profession of sea transportation.

It also reads “Dr. Buhari said there was need to promote gender balancing in the seafaring career, adding that the President is aware of the economic benefits that come with encouraging the female gender in the maritime sector.

On his part the Director-General of the Nigerian Maritime Administration and Safety Agency (NIMASA), Dr. Dakuku Peterside, spoke in a similar vein, saying the men should support women, especially in maritime, “towards reaching their potential and navigating work place challenges.” This was just as President of the World Maritime University (WMU), Dr. Cleopatra Doumbia-Henry, applauded Nigeria’s effort to encourage more female professionals in the maritime industry.

The First Lady, who was represented by the wife of the Vice President, Mrs. Dolapo Osinbajo, commended NIMASA’s efforts to promote and encourage women in the maritime sector. She noted that such was in line with the President’s aspirations for the sector.

According to her, “Under the current leadership of NIMASA, we have seen significant strides aimed at making women active players in the blue economy industry. Mr. President is desirous of seeing more women play active role in the maritime industry. This celebration focusing on women seafarers is, therefore, apt.”

She called on “all government agencies, especially those in the maritime sector, to ensure the achievement of the United Nations’ Sustainable Development Goal 5, which is aimed at attaining gender equality and the empowerment of all women and girls.”

The NIMASA DG, speaking further, called on men to provide the needed support for women to participate actively in the maritime sector. “We hope to sensitise the industry operators and players on the significance as well as economic importance of bridging gender inequality and the need for men to support women towards reaching their potential and navigating workplace challenges For us to have more women at sea and onshore, the men have a major role to play in terms of providing the needed support.”

He further added that the Agency will continue to pursue policies and programmes that will accelerate gender equality and empowerment of women in the maritime sector. “In addition to the 304 female cadets we have trained in seafaring since the inception of the Nigerian Seafarers Development Programme (NSDP), greater attention will now be given to the training of female seafarers in specialised courses and areas to enable them take up professional responsibilities in specialised vessels and offshore operations, and maritime sector generally,” Dakuku said.

On the New Cabotage Compliance Strategy (NCCS) that suspends waivers on Cabotage manning, Dakuku disclosed that placement of women on board vessels will be given high priority, with greater attention also given to providing an enabling environment for female seafarers. He disclosed that the Agency had already recorded success through the NCCS initiative with about 7,000 Nigerians employed by ship-owners between 2018 and the first quarter of 2019. He said the Agency was doing everything in its powers to resolve the issue of armed robbery and piracy at sea.

In his address, the Permanent Secretary, Federal Ministry of Transportation, Sabiu Zakari, said the Federal Government had initiated policy reviews aimed at promoting gender equality, empowering women in the maritime sector, and creating conducive work environment for them in line with the SDGs.

The WMU President, in his goodwill message to Nigeria on the occasion of the Day of Seafarers, said, “Nigeria is one of our long-standing partners that has provided funds for our fellowships and we want to encourage them to continue. Under the MoU with NIMASA, as well as the support provided by the Nigerian Ports Authority, today, we have 199 WMU alumni from Nigeria, of which 31 are women. About half of these Nigerian female graduates were funded by the government. The rest received funding from other sources and other WMU partners.”

Prominent Nigerian women in maritime also graced the occasion. They included Director-General of the Nigerian Chamber of Shipping (NSC), Mrs. Obiageli Obi, and Chairperson, Nigerian Shipownwers Forum, Mrs. Margret Orakwusi, all of who called for more support for the female gender in the maritime career.

In attendance also were members of the NIMASA Governing Board, led by the Chairman, Gen. Jonathan India Garba, and members of the Executive Management.

The Day of the Seafarer is celebrated all over the world on June 25 every year following the resolution adopted by the 2010 diplomatic conference in Manila, Philippines, in line with the International Convention on Standards of Training, Certification and Watchkeeping for Seafarers (STCW Convention).

The International Maritime Organisation (IMO) adopted “On Board with Gender Equality” as the main campaign theme to celebrate the 2019 Day of the Seafarer, which echoes IMO’s theme for the 2019 World Maritime Day, and coincides with the disposition of NIMASA as a gender-sensitive organisation.

It is expected that throughout 2019 there should be a strong emphasis in the maritime space on the importance and value of women within the professional ranks, a campaign driven and targeted at empowering women in the maritime community with the hope of having a strong and far-reaching resonance.