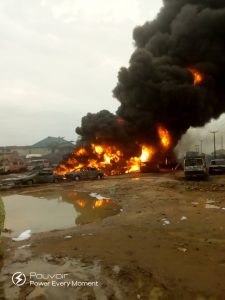 Fuel scoopers have this morning cause the death of two unidentified men , while several vehicles and shops were burnt in an early morning fire from pipeline explosion in Ijegun area, Ikotun, Alimosho LGA of Lagos state.

According to an eyewitness account, the fire started around 3:00hrs this morning at fire junction along Ijegun -Isheri pipeline. 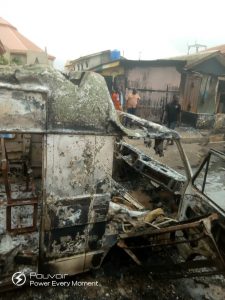 Illegal bunkerers were said to have position three fuel Tankers to scope fuel after bursting the pipeline at the fire juction, when the fire ignited.

Like a wild fire, the fuel ran through gutters, starting from the Isheri road main gutter to Irede street, to Ayinde street and terminated at Tijani Awolumate street, where its burnt down two men into a canal . 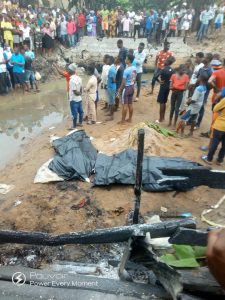 Aside from the two dead bodies,three vehicles were also burnt at Tijani Awolumate street. Among the vehicles is bus , which eyewitness said the two victims might have ran out from the bus, when it catches fire to sought relief in the water at the canal.

Unfortunatelythere was no water in the canal and sadly the two men died with severe fire burns.
They have seen been evacuated by the Lagos State Emergency Management Agency (LASEMA) ambulance.

The fire which ran through over three kilometres along gutter routes , in its wake burnt the Ijegun High School fence, several houses fence, numerous shops and vehicles.

As at the time of filling in this report, the fire was still burning as the Fire Service could not do anything.

It could be recalled that about fifteen years ago, pipeline fire had ravaged Ijegun at that same scene it started today .It was sparked up by a bulldozer during the construction of the Ijegun-Isheri road.
That same spot is where is called fire junction today. The same spot the fire ignited this morning..