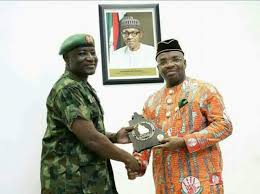 The commendation was conveyed by the Commander, Joint Task Force, Operation Delta Safe, Rear Admiral Akinjide Akinrinade, during a courtesy call on the governor in Government House, Uyo, the Akwa Ibom State Capital.

In his remark, Akinrinade said “On behalf of the Chief of Defence Staff, who particularly asked me to appreciate you for the support given to the military in the state, I want to place it on record, your government’s renovation of Barracks accommodation in Ibagwa”.
“We also want to appreciate you for the strides in giving that Nigerian Navy a befitting Nigerian Navy Technical School, Ikot Ntuen, and the Army Command Secondary School in Efa”, he said.

Also, Akinrinade who commended Mr. Emmanuel for the strategic initiative in granting amnesty to militants in Oruk Anam and and Etim Ekpo Local Government Areas, said that efforts led to the peaceful conduct of the general elections in the state.

He noted that the level of development in Akwa Ibom could be attributed to the prevalence of peace in the state being engineered by the governor.
He said within the last three months, the Joint task Force has arrested over 300 persons involved in all forms of criminalities, destroyed illegal refineries and seven vessels involved in oil theft.

On his part, Governor Udom Emmanuel called on the security agencies to intensify efforts in intelligence gathering to combat criminality and insecurity in the Niger Delta region.

He expressed appreciation to the security agencies for the collaboration with the state government in making the state a safe haven for investors, pledged to partner the Armed Forces to succeed in their assigned tasks.

Emmanuel, however, decried the
menace of drug abuse that has become rampant among young adults in the society and urged relevant security agencies to assist in the eradication of the use of illegal drugs as parts of its fights against criminality.