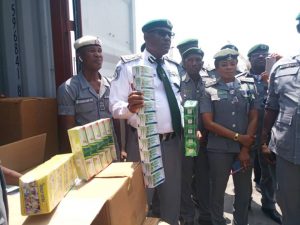 AP Moller the private terminal operator of the largest container terminal in West and Central African region is in the news again.
APMT which was concessioned the Apapa container terminal has always been alleged by stakeholders to either charging illegal fees or cause delays in trade facilitations in the port . 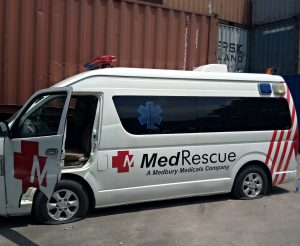 Yesterday the sabotage by the company takes a new dimension as two staff in its fold where caught by the Customs for concealing cartons of Tramadol in the Company’s ambulance for onward exit from the port.
The Apapa Area Command of the Nigeria Customs Service arrested and detained two suspects caught with the stolen Tramadol.

The two suspect Micheal Ajibade and Olatunde Emmanuel were said to have concealed 10 cartons of 225mg Tramadol tablets valued at N2,814,139 in an ambulance.
The alleged crime was said to occur on Friday 12th July 2019 at about 2300hours during a surveillance by officers of the Customs when they intercepted an ambulance with registration number LND 605XW, Lagos suspected to be laden with offending articles of trade.
Upon examination by the officers , the said ambulance was discovered to be carrying ten cartons of 225mg of Tramadol.
Tramadol is a banned , but regulated drugs in Nigeria.

Briefing Journalists yesterday, the Controller of Apapa Customs Command, Comptroller Muhammed Abba-Kura said “During routine surveillance on the 12th of July at about 11pm his officers intercepted an ambulance (Hyundai) with registration number LND 605 XW that is suspected to be laden with offending articles”.
Upon examination, the command boss said the ambulance which have two occupants that are said to be in-house staff of AP Moller Terminal concealed in the ambulance 10 cartoons of 225mg of the said drugs.

Investigation however revealed that the stolen Tramadol were pilfered from an undeclared container at the AP Moller Terminal. Physical examination further revealed that 211 cartons of the drugs were missing from the container.

Abba-Kura who disclosed that the Duty Paid Value (DPV) of the stolen drugs stands at N59,378,332.09), express displeasure towards these economy saboteurs and their unpatriotic attitude despite efforts by Nigeria Customs Service to ride the nation of illicit drugs.

” It is regrettable to state here that while the Nigeria Customs Service is working round the clock to free this country of illicit goods, some recalcitrant and unpatriotic citizens are not relenting in their desperate urge to sabotage our efforts.

“Ordinarily nobody would suspect that such act can be ommittef by supposed stakeholder’s that ought to be collaborating with the service to rid the nation of these harmful drugs.

” The Commands strategy of 24hours surveillance in and around the port has continued to yield desired results”/he quipped.”

He however added that preliminary investigation is on going as the command is currently working hard to ascertain the level of involvement of other members of staff of the AP Miller Terminal with the view of getting to the root of the incident so as to take the appropriate action.

It is a common scene around the port areas that sex enhancing drugs and stimulants are being hawks around.
With the latest discovery and with the missing 211 cartons of the illegal banned drugs, its believed that the AP Moller staff have been sabotaging the Country and making illegal fortunes from this acts.