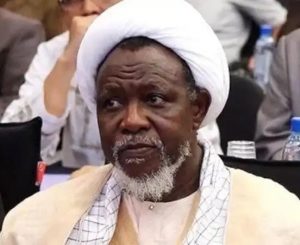 The Islamic Movement of Nigeria (IMN), known as Shiites Tuesday vowed to continue protesting for the release of its leader Ibrahim El-Zakzaky.

According to the spokesman of the group , Abdullahi Muhammad Musa also said 40 of its members lost their lives while several others were wounded and many others arrested by the Police.

Musa said his group will continue the protest until their leader Ibrahim El-Zakzaky is freed by the federal government. He said
“Even though heavily armed forces laid siege of our brothers and sisters at Banex Plaza today, teargassing and shooting live rounds of ammunition, free EL-Zakzaky protests will continue nonstop unless our leader regains his freedom to go and tend for his seriously deteriorating health condition,” Shiites spokesman Abdullahi Muhammad Musa said.

Musa, who spoke at the funeral ceremony of their dead members in Suleja, Niger State, said about 40 members of the Shiites died during Monday’s protest in Abuja.

“Yesterday, at Federal Secretariat, the bureaucratic seat of the Nigerian government, police gunned down close to forty protesters, wounded scores and arrested very many.”

However, the police’s figure differs from the Shiites spokesman. Police said 11 Shiite protesters died during the protest.

The protest on Monday, July 22 had claimed the life of Usman, a Deputy Commissioner of Police who was in charge of operations at the Federal Capital Territory Police Command and a Youth Corp Member who served as a journalist with Channels Television and about 11 Shiites according to police sources.

The leader of the Islamic Movement of Nigeria (Shiites) El Zakzaky was charged with murder in April 2018. El-Zakzaky’s alleged offence happened in December 2015 when Shiites and a convoy of Nigeria’s army chief, General Tukur Buratai clashed in Kaduna which led to the killing of many Shiites including six Children of their leader, Ibrahim El-Zakzaky.

Despite the continuous clash with security operatives, Musa said the killings “can never put off a conceptual cause as the Islamic movement is, and the struggle continues.”

“Trigger-happy security personnel should know that senseless killing can never put us off the streets of Abuja, it only adds more power to our elbow; no amount of cruelty and inhumanity will deter us. Our leader should just be released. Tomorrow is another day for us, and protests continue.”.