Home » Maritime » Customs » Customs War On Illicit Drugs: Another 21 Trucks Of Tramadol, Others Seized in Lagos

Customs War On Illicit Drugs: Another 21 Trucks Of Tramadol, Others Seized in Lagos 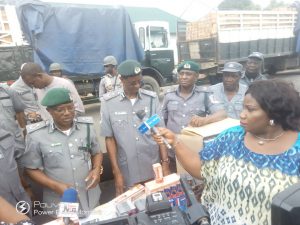 The Nigeria Customs Service in its efforts to rid the Country of banned and controlled imported drugs has again intercepted 21 trucks of illicit drugs worth over N5billion. 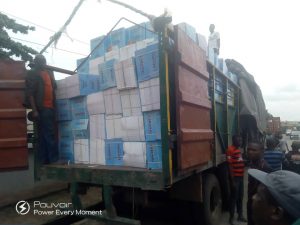 According to the National Public Relations Officer of the Nigeria Customs Service, Deputy Comptroller Joseph Attah,who stood in for the Comptroller General, Col.Hameed Ali said the drugs mostly Tramadol was discovered by the the CG Strike Force Zone “A” in a Warehouse along the Oshodi – Mile 2 expressway in Lagos state. 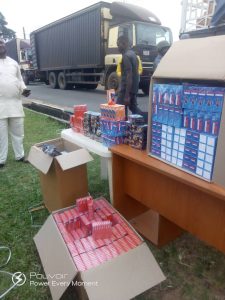 Briefing newsmen at the Customs Training College in Lagos, Joseph Attah disclosed that the Strike Force Team intercepted one truck of the drugs which was being moved on Sunday and on apprehending the driver of the truck he took the team to a massive warehouse were the drugs were being stored. 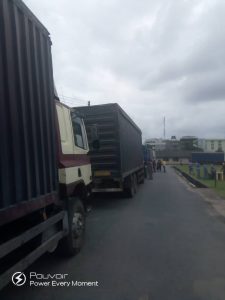 “Operating on the erroneous belief that festive period is a time of merriment and less vigilance, smugglers of illicit drugs attempted to move their deadly drugs from Lagos to other parts of the country

“On Sunday, August 13, 2019 at about 2am, the operatives of Headquarters Strike Force intercepted one truck laden with dreaded Codein ,Tramadol and other controlled pain killers along Maryland, Ikeja.

“Already,the Comptroller General of Customs, Col. Hameed Ibrahim Ali (Rtd) has directed thorough investigation with a view to bringing all those connected to the drugs to justice.
“Meanwhile evacuation of the drugs to the Federal Operations Unit has commenced” Attah said

He added that the drugs which have no National Agency for Food Drug Administration and Control (NAFDAC) numbers are estimated to be loaded in 21 trucks.
Aside Tramadol , other drugs seized includes Codein, controlled pain relievers and other unregistered medicines .

Speaking also, Deputy Comptroller
Usman Yahaya,the officer -in -charge of the CG Strike Force , Zone ‘A’ said efforts are on to arrest the smugglers and anyone connected with the smuggling of the drugs.

“We are investigating and will get to the root of the matter. We will leave no stone unturned to get the perpetrators.
Aside these trucks we have here, there are many other drugs in the warehouse which our men have sealed awaiting full evacuation of all them to Customs custody ”

It could recalled that the NCS in collaboration with NAFDAC and other agencies recently carried out destruction of similar drugs worth over N14b at Shagamu in Ogun State and is doing same in the other three Zones of the Service across the Country .