CUSTOMS DESTROYS ANOTHER SET OF POULTRY PRODUCTS WORTH N23.7M 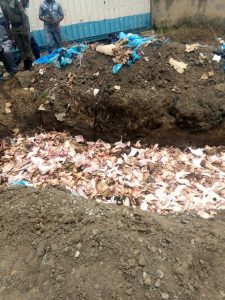 The Western Marine Command of the Nigeria Customs Service on Tuesday in Lagos , destroyed a total of 2,349cartons of poultry products valued at N17.6 million ,with a Duty Paid Value of N23.7 million.
This is the second seized poultry products to be destroyed by the command within a week. 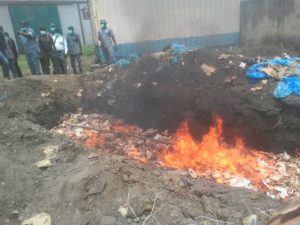 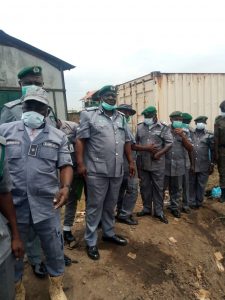 According to the Command Area Controller, Comptroller Boyilila Binga, the latest seizure was intercepted in two locations at Badagry and Ibeshe waterways on 21st and 22nd September respectively.

Addressing journalists during the destruction of the commodities at the dump site today, Comptroller Binga warned smugglers to desist from the illicit business , adding that the operatives of the Command will continue to record seizures if they fail to repent.

Binga who was accompanied by officers of sister government agencies, urged smugglers to source for other forms of livelihood adding that such items were not suppose to come into the country.

While highlighting the items intercepted recently, he stated that a total of 2,096 cartons were intercepted on the 21st and 253 cartons the next day, totalling 2,349cartons.

Comptroller Binga said:”The command is always ready to intercept contrabands and if the smugglers do not want to stop then we will not relent’.

He noted that his officers were able to make the seizures through intelligence gathering and usage.