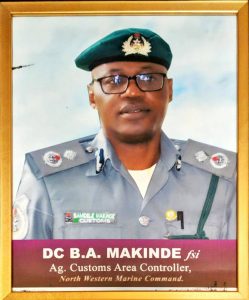 The acting Customs Area Controller of North Western Marine Command of the Nigeria Customs Service; Deputy Comptroller Bamidele Makinde (fsi) in the third week of October 2019 embarked on a familiarization tour of his Area of Responsibility (AOR), where he seeks his officers cooperation to achieved the goals and objectives of the newly established command.

In a statement by the command’s Public Relations Officer, SAIDU NURUDDEEN ABDULLAHI DC Makinde while on the tour addressed officers at Yelwa-Yauri and Dole Kaina outstations.
He stated that the newly created command with its headquarters at Lokoja, Kogi state, is charged with the responsibility of protecting Nigeria’s territorial integrity at the North western marine end of the country.

He mentioned some of the areas to be covered by the command to include Yelwa-Yawuri, Lolo, Dole Kaina, Gumbi, Toro, Tsamiya, Tunganleda, Gaffara, Wara, Zamare amongst others.

Makinde also disclosed that the Command will re-strategize by positioning the outstations’ to better combat the threat posed by daring smugglers, noting that the anti-smuggling operation will be reinvigorated to ensure that the illegal routes around the waterways are effectively manned.

The statement further said that the Ag. Controller encouraged the officers to remain steadfast and diligent in the discharge of their duties. While charging them to complement the Comptroller General of Customs effort by sustaining the tempo of total compliance with the Federal Government fiscal policies.

It could be recalled that the management of the NCS recently created eight new commands among them is the North Western Marine Command.