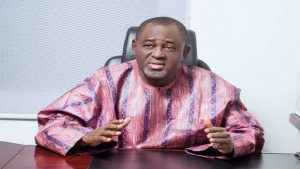 The Nigeria Export Processing Zones Authority (NEPZA) has said it supports the federal government on border closure because of the whooping N1.45 trillion worth of goods smuggled into Nigeria annually.

The Acting Managing Director of NEPZA, Engr. David Terhemba Nongo said this at the Two Day National Workshop on the Role of Maritime in the AfCFTA Agreement with the theme: AfCFTA: Boosting Nigeria’s Economy for Sustainable Development.

The workshop was organised by the Association of Maritime Journalists of Nigeria (AMJON) in Lagos on Wednesday.

He lamented the menace of smuggling of goods through the Benin Republic corridor into Nigeria saying it is of negative economic influence to the nation.

According to the MD who was represented at the event by Simon Tsuwan, a recent World Bank report stated that about N1.45 trillion worth of goods are smuggled into Nigeria annually through the Benin border alone.

His words, “This prompted Africa’s foremost industrialist, Alhaji Aliko Dangote to lament that there is no country that can survive with Benin Republic as a neighbour.

“And he went further to call for drastic action so as to save the Nigerian economy. The President Buhari government has taken the bold decision of closing the land borders and although there have been protests from majority ECOWAS member states. Nigeria insists that the closure would remain in force till January 31st, 2019.

He added that the ban would help to boost local manufacturibg job creation and economic growth by checking the smuggling of goods into the country.

He further stated that the closure would also help to increase her global competitiveness as well as attracting investors and be simultaneously frustrating their growth or even take-off.

Earlier, he pointed out that the difficulty the authority would have had was infrastructural deficits but was quick to add that the agency is already updating and providing infrstructure.

“We are deploying technologies and New Media to improve service delivery, digitalising our operations and simplifying procedures etc all in a bid to get the most from the AfCFTA,
39 Free Zones already licenced
In line with this noble mandate, NEPZA has so far licenced 39 Free Zones/Industrial Parks spread across the country, two of them public.

“Of the 39 FZs, while 14 are at the moment operational, the rest are still under various stages of development.
Furthermore, NEPZA has the presidential authorization to licence seven new, pilot Industrial Parks/Special Economic Zones i.e. one in each of the country’s geo-political zones. These are: new Special Economic Zones (SEZs) in Lekki, Sokoto, Makurdi, Ilorin, Bauchi, Abakiliki, and Benin.

“Over $16bn FDI attracted into the Economy from 1992 till April 2017, NEPZA had 34 FZs spread across the country, and between then and now, the number has risen to 39. And with 39 FZs/Industrial Parks and well over 400 licensed Free Zone Enterprises (FZEs), NEPZA has attracted over $16billion FDIs into the national economy since inception; and contributes a major percentage of the FDI that Nigeria attracts. ” he said.