Not less than 100 containers of illicit banned drugs , mostly Tramadol were imported into Nigeria through the APM terminal, Apapa between 2017 and 2019, our investigations has revealed. 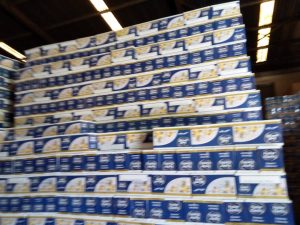 Our findings also shows that , while over 40 by 40ft of such containers have been intercepted by by the Customs, the rest were falsely cleared, while some are still in the terminal waiting to exit the port. 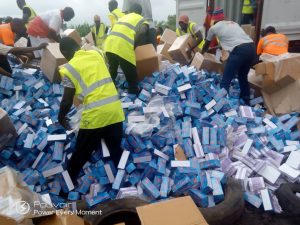 In a document sighted by our Correspondent, all the containers are forty footers and the importers are cartels of money bags ready to pay any amount to move the banned drugs from the Apapa port.

While the Customs is making efforts to identity the illicit goods, the importers in collaboration with some Customs Officers and their Agents are making moves to clear the drugs through falsification of documents and huge financial settlements to the examination officers to doctor their reports as dutiable goods.

Our intelligence report also shows that over 20 by 40ft containers of Tramadal drugs are alleged to be waiting at the Apapa port. Some of the containers have been temporary abandoned, while some are waiting for the green light to be moved out of the port through false declaration.

Our Correspondent also sighted the alleged container numbers which are either MSKU or MRKU boxes, meaning they are Maeskline Containers.
Maeskline is the parent company of APM terminal, Apapa.

Tramadol drug has become a hot market product, with a 40ft container alleged to cost over N1 billion, while a carton is sold at over N5million .

Tramadol drugs are mostly imported from China and India and are usually declared as computer parts and accessories or spare sparts.

Most of the intercepted 40ft containers cantaining drugs are falsely cleared and paid as minimum as N800,000.

It could be recalled that in 2017, the Apapa Customs command intercepted 40x 42 containers of tramadol and other banned drugs.

The importers also offered the Customs N150million bribe to exit the containers, but was rejected by the then Customs Area Controller of the Apapa port, now Assistant Comptroller General Abubakar Bashir.

Also in July this year, an ambulance belonging to APMT was found to have stocked over 20 cartons of tramadol suspected to have been pilfered from an unexamined container at the terminal.

Over 100 cartoons were also found to have been taken out before the container before the discovery.