ANLCA, President Nwabunike to be Inducted as Supporters Club Patron 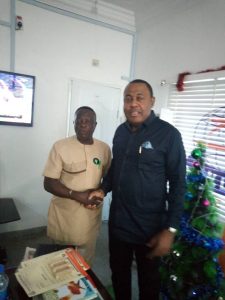 Another patronship is to be bestowed on the National President of Association of Nigerian Licensed Customs Agents (ANLCA), Hon. Iju Tony Nwabunike.

Dr  Rafiu Oladipo, the President  General Worldwide of Nigerian Football Supporters Association,  who was also the first National President of Association of Nigerian Licensed Customs Agents (ANLCA) said he will induct him as  a Patron of the worldwide body and   assured stakeholders that he will join hands with the elders of ANLCA to solve the myriad of problems facing the Industry.

Dr Ladipo who is also the the President of Nigerian Boxing Board gave the assurance when he paid a courtesy visit to the National President of ANLCA, Hon. Iju Tony Nwabunike in his office at the Dikko Inde House headquarters of the association.

The elated Nwabunike in a brief chat with the founding  ANLCA president  narrated the ugly trend of the maritime sector and the hardship Customs brokers and other practitioners are passing through, especially in the hands of some of the government agencies.

Nwabunike said the Nigeria port industry is today saddled with  so much problems, that he needs the supports of elders and former presidents of ANLCA to tackle them.

Dr  Oladipo in his response said he is ready to work with the ANLCA president to solve the problems . ” It is our problems, we will solve it together. This is the industry that has given much to me and make me who I am today, I will support you to succeed.”

He thanked Nwabunike for the honour done him and prayed for him to succeed in leading the association to a prosperous future.

Oladipo suggested  that ANLCA should organise workshops to educate and train members on tariff classification and proper clearing procedures that will discourage them from embarking in fraudulent businesses.

The highlight of the visit was the pronouncement of Hon. Tony Nwabunike as a Patron of Nigerian Football Supporters Club, by Dr Rafiu Oladipo.

Dr Oladipo said an official date will be fixed for his official induction.

Present at the visit was, the Vice President of ANLCA, Dr Kayode Farinto, National Secretary, Mr Abdulazeez Mukaila and the Coordinator, Western Zone of ANLCA, Chief John Ofobike among others.