DC Yahaya Hits Ground Running; Seized N67m Worth of Goods in One week 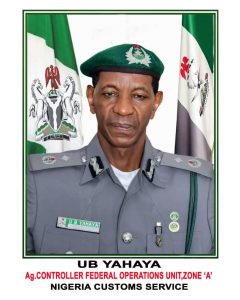 Barely a week of his resumption as the Acting Controller of the Nigeria Customs Service, Federal Operations Unit , Zone ‘A’ Lagos State, Deputy Comptroller Usman Yahaya has continued to live up to his statutory responsibilities especially in the area of anti-smuggling operations. 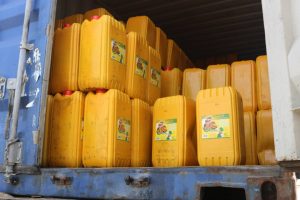 His quest for outstanding performance using credible intelligence has begun to yield positive results with the interception of various contra ban goods ranging from 2,065 jerrycans of vegetable oil of (25litres each), 1,185 bags of 50kg foreign parboiled rice, 1500 jerrycans (25lts each ) of diesel all amounting to a Duty Paid Value of N67,362,500.00 .The seizures were made between January 7th to 14th, 2020.

The goods were seized along different unapproved routes within the Unit’s areas of coverage.

According to a release issued by the Unit’s Public Relations Officer, Jerry Attah , he said that the feat is coming as a result of series of meetings held with their Sectional Heads, Team/patrol Leaders where the Controller had unveiled the management’s mandate
bestowed on him. Which includes blockage of all revenue leakages, trade facilitation and intensification of anti-smuggling operations at various entry
points, Seaports, land borders and Airports within their areas of jurisdiction in the south west zone.

DC Yahaya also warned smugglers and other duty evaders of the dangers that lies ahead for them if they do not engage in legitimate trade, as some have started counting their losses.

Meanwhile, DC Yahaya’s redeployment was part of the Comptroller-General’s strategy to rejig and reposition the Service for greater efficiency and effectiveness, especially in the areas of revenue generation, trade facilitation as well as combating smuggling.

Deputy Comptroller Usman Yahaya is a quintessential and an enforcement guru who hitherto was the Coordinator of Strike Force, Zone ‘A’, before he was posted to FOU ‘A’ as the Acting Controller.
He took over on Tuesday 7th January 2020, from Comptroller Aliyu Mohammed, who was elevated to a new assignment as the Acting Sector 4 Commander of Border Drill
Operations code named Ex-Swift Response.

The assumption of office by Usman Yahaya at FOU ‘A’ has sent panic to all smugglers and non-compliant traders knowing very well his antecedents as an enforcement Czar. He however thanked the Comptroller General of Customs, Col. Hameed Ibrahim Ali (Rtd) and the entire Management team of the Nigeria Customs Service for considering him worthy and assured he will work assiduously with all officers to justify the confidence reposed on him.