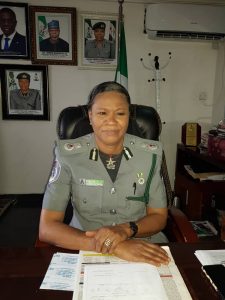 The Public Relations Officer of the PTML Command, Nigeria Customs Service, Yakubu Mohammad has attributed the protest by some Agents at his Command this afternoon to non compliance Agents who are relying on “Valuation Outside,” instead of paying the real valuation given to them by the Customs. 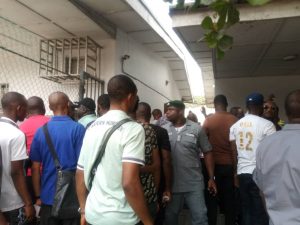 Yakubu also said most of the protesters are not real Agents, but touts who are aggrieved that the Customs have blocked their fraudulent ways of livelihood.

Explaining what is “Valuation Outside”, the Command’s spokesman said, ” For example a vehicle is surpose to pay N3miilion , the Agent will go and forged valuation outside the Customs to pay N2million. If that happens, the valuation officer will placed ‘Alert’ on such vehicle.

“Do they expect the Customs officer to allow them carry such vehicles.? For sure multiple alerts even from Abuja will be placed on such consignments” he said.

This afternoon, Agents stage a peaceful protest at the entrance of the Customs Area Controller’s office at the PTML command, causing panic and fear.
Their complains were that Customs placed multiple alerts even after giving them value and they have been doing that to extort more money from them, as well as demurrage.

Meanwhile, the Customs Area Controller, Comptroller Dixon Florence quickly put the situation under control by advising the protesters to be trade compliance and pay their generated values from the Customs.