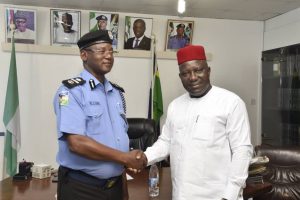 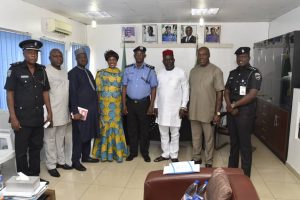 The visit among other things was for the Council to congratulate the new AIG on his appointment and also enlighten him about NSC’s activities as Port Economic Regulator.

Agu who represented Barr Hassan Bello, the Executive Secretary and Chief Operating Officer of the NSC highlighted the Council’s roles in ensuring Ease of Doing Business in the Maritime Industry, some of which include freight forwarders rates negotiation, recovering monies from imposed charges and enforcement, amongst others.

In his remarks, the marine command AIG, Muhammad Uba Kura assured NSC of the full support of the Nigerian Police Force. He said the Nigerian Police is positioned to fight and reduce, to the barest minimum, the activities of criminals who make the mistake of operating anywhere within the coverage area of the Marine Command.
He opined that if revived, the Cargo Tracking Note, an initiative of the Nigerian Shippers’ Council, has the potential to curb the activities of criminals.

Agu, further urged Uba to visit the ES/CEO at NSC Headquarters to further cement the relationship between the Council and the Maritime Police , while Uba guaranteed the cooperation of the Police Force whenever needed by NSC.
Muhammad Uba Kura, was the F
former Police Commissioner at Nigerian Port Authority, before being elevated to the position of AIG Marine Command.