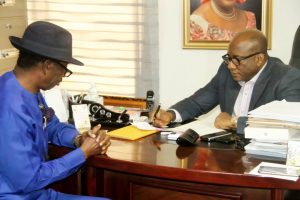 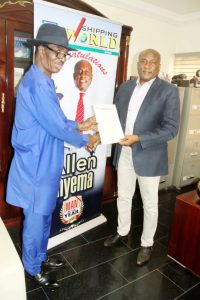 Asu Beks who led a team of senior journalists ,Emeka Okoroanyanwu and Frank Meke to present the letter of nomination to the Air Peace boss on Monday in Lagos said Onyema was selected for the award by the board of editors of the Shipping World Magazine. 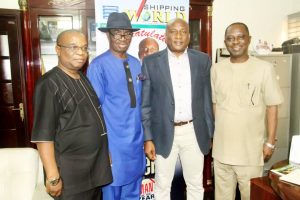 The presentation and clarification also witnessed a prayer session were the the Magazine publisher , Asu Beks rebuked those who were pregnant with evil plans against the airline and its management, the payer was responded with a resounding Amen from all present at the event.

” It’s was indeed touching moment to recalled that bad things could happen to good people and in the case of the Air Peace boss, Nigerians from all tribes and tongues were on same page that Allen Onyema does not deserve the black coal tar the enemies of progress wish to colour him with.” Asu said.

It took Onyema time to respond to Asu Beks well carried and intentioned prayers sensing the pains the whole matter caused him as he struggled in a touching voice to explain how Air Peace was funded.

Mr Allen Onyema , a philanthropist from Anambra State , shocked Nigerians when in the wake of the xenophobic attack on Nigerians in 2019 in South Africa deployed his airline to evacuate Nigerians from South Africa free of Charge.

The Air peace boss was later accused of money laundering by the United States , which he felt he was paid in bad coin by forces who were envious of the progress of the airline.
” I must thank Nigerians who came to defend me and stood by me. The love of these good Nigerians was unprecedented. It made me strong and for Shipping World Magazine to come forth with this honour, is unbelievable.” Onyema said.

Asu Beks said his organization has recognized Nigeria and Nigerians and “How well we take pleasure in bringing down our best, but with ASU Beks and his magazine, our best in the likes of Allen Onyema must be encouraged and honoured.
” The date for this great gesture and awesome time out for the best of our own in aviation and tourism, is loading!! Watch out on this space.” The Shipping World Magazine publisher concluded.