In its renewed efforts to fight the influx of fake and substandard products into the country, the Standards Organisation of Nigeria (SON) is carrying out sensitisation awareness campaigns to various sectors of stakeholders in the country. 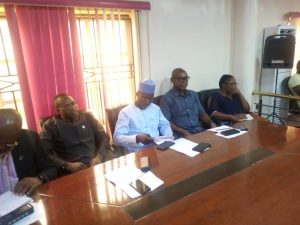 The recent being its sensitisation workshop held yesterday at the International Markets Association (Electronic Section ) at the Alaba International market in Lagos state. 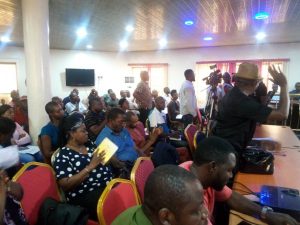 The Director General of SON, Osita Aboloma who was represented by a Director from his office, Engr. Yahaya Bukar stressed the need to fight the war of fake and substandard products within.

He inform the traders that both SON and the association has decided to constitute a taskforce that would comprise members of the association as well as officials of SON, with the task of taking regulation closer to the importers and traders.

According to Aboloma “We want to fight the war from within because you know those that are not
complying. We know that there are genuine and well meaning importers, manufacturers and traders that are highly committed to complying with the requirements of standards.

“We must also protect the businesses of the genuine importers and traders by eradicating substandard products from the markets and ensure that
Nigerians get value for the money spent on electronics”.

The SON, DG also emphasized that it is the duty of SON to make sure that electronic products sold in Nigerian markets are safe to use, especially as the Alaba international market is regarded as the largest electronic market in West Africa.

” It is our responsibility also to ensure that electronic products in our markets are safe to use.
The Electronics Market of Alaba International Market is reported to be the largest Electronics Market in West Africa if not in Africa.

” It will be a thing of joy also if the Electronics Market of Alaba is noted for only good quality products.
This is not impossible to achieve. It only requires your collective effort, dedications, patriotism, truthfulness, uprightness and more importantly, the fear of God.”
Aboloma said.

He asserted that the engagement was one of SON’s approach to fight the war against substandard products from within. The SON boss encouraged the importers to approach SON to enable them brand their manufactured products with their brand-names rather than using labels of already established foreign brands, which according to him, such acts amount to promoting and creating employment to those countries nationals.

“Substandard and fake electronic gadgets cause lots of hazards including, electrocution, deaths, injuries, loss of revenue, among others. We seek your contribution as worthy stakeholders in this fight against sub-standard products. We urge you to avoid non compliant trade,” he warned .

Ugochukwu also admonished the government to reopen the nation’s land borders, noting that genuine traders and importers have suffered severely from the border closure.

He assured SON that members of the association would continue to adhere to stipulated SON standards even as he encouraged his colleagues to tilt towards manufacturing their own products rather than importing finished electronic products.

He observed that the theme of the event, “Promoting Self-Regulation to Eradicate Substandard Electronics from Nigerian Markets” showed the high degree of stakeholders’ engagement by SON to sanitize and rid Nigeria of substandard products.

Ugochukwu said “As an association, we understand the profitability and benefits of the objectives of SON and having collaborated with them in the past, we already have in existence a committee whose duty is to ensure the prohibition of substandard products in the market and we hope to do more in achieving this goal,” he assured.

The event was attended by top SON officials from the key departments that regulates and enforces standards. The high piont of the event was the display of several branded and authentic products owned by members of the association.