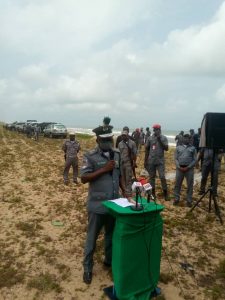 Comptroller Olugbenga Peters of WMC addressing the gathering at the event 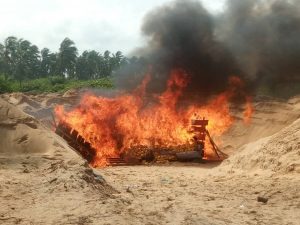 The drugs being set of fire. 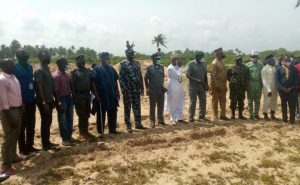 Security Agencies and other stakeholders that graced the destruction.

According to Comptroller Olugboyega Peters, the Customs Area Controller of the Western Marine Command who administered the destruction in Badagry, disclosed that the seizure is the highest single haul of cannabis in the history of the NCS. 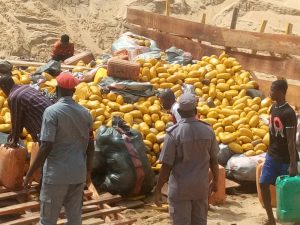 He said the seizure was made on the 21st April, 2020 following intelligence in Agaja Beach an exit point from the high sea at 1200hrs in Lagos State.

Peters said, aside from the drugs being in contravention of extant laws, the importation is capable of causing adverse effects on its consumers including a breakdown of the central nervous system.

He added that abuse of such drugs could lead to increase in violent and other crimes that are inimical to the growth of the society.
According to him, Cannabis Sativa, also called Indian Hemp, is not a prohibited drugs but a substance under control.

“The seizure of this Cannabis Sativa was made on April 21,2020. It is classified in schedule 2, Section 2 under vegetable products of page 34 of the ECOWAS Commo External Tariff (CET), Harmonised System Code 0602 9000 of 5 percent duty rate and 7.5 Value Added Tax (VAT).

“The seizure was based on credible intelligence. The smugglers on sighting our officers abandoned their consignment and jumped into the water, a terrain they know so much.

“Our patrol officers had to hire boats from fishermen who were fishing nearby. They were 10 in number who arrived our base in Ibafon area of Lagos State.

Peters also lauded the cooperation of various Security Agencies like the Nigerian Army, Navy, Polic and National Drug Law Enforcement Agency (NDLEA) in the fight against illegalities and all forms of snuggling.

Also speaking at the event, Dalha Cheidi Wada, Customs Area Controller of Seme Border Command sued for compliance with the law by all citizens.

He also reiterated the service commitment to sustain and increase it’s tempo of anti smuggling activities even in the face of partial closure of some border stations in the country.

The drugs were set on fire with the Representatives of NDLEA, NAFDAC, Police, Army, Navy, Civil Defence, Royal Fathers among others who watched the destruction and jointly signed the certificate of destruction of the drugs.