NAGAFF Inaugurates 100% Compliance Team to Tackle Corruption in the Ports 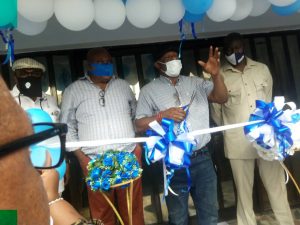 National Association of Government Approved Freight Forwarders NAGAFF) has inaugurated its 100% Compliance Team to scrutinize activities of government agencies terminal operators, Importers and their Agents in the Ports. 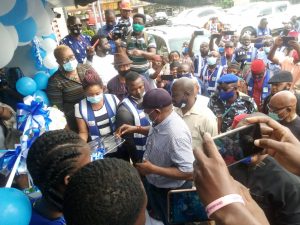 The team which is headed by Alhaji Tanko Ibrahim as National Coordinator is spread across all the ports, terminals and Bonded Terminals in the western axis. 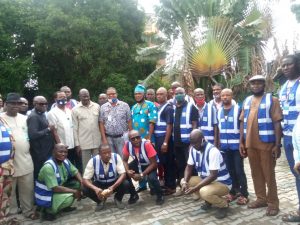 The team is also to checkmate indiscriminate stemming of Containers to Bonded Terminals and other infractions by Terminal Operators.

The Founder of NAGAFF, Dr Boniface Aniebonam, while commissioning the Headquarters Office of NAGAFF 100% Presidential Compliance Committee, at the Eleganza Plaza in Apapa lamented that terminal operators now take containers whose destination is Apapa port to other terminals ,hereby causing pains and other financial burdens to the importer.

Aniebonam also condemned the terminal operators for failing to prepare the Uncleared Cargo List for exit out of the ports, saying that this is why overtime cargoes have continued to litter the port.

He however charged the 100% Compliance Team headed by Tanko Ibrahim, a Vice President of NAGAFF, to go into the port and sanitize freight forwarding operations and rescue freight forwarders and their Agents from the collapsing port system.

Aniebonam said, “One of our biggest challenge today is the stemming of cargoes meant for Apapa and Tin Can Island ports to outer ports without the consent of the importers or freight forwarders”

“The terminal operators take containers whose destination is Apapa, and they take it to another location, they collect their money, the outer terminal would still charge you money for what you didn’t even ask for.
Nobody has right to change the destination of a cargo, the Shippers Council is already taking action on the matter.

” But today, the cargoes would be 90 days and above and the terminal would be collecting money when the law says you should take it out of the port”.

The NAGAFF founder also admonished freight forwarders to stop bribing government officials all in the name of getting their cargoes out of the port.

He noted that a lot of freight forwarders are being intimidated in the port today, but we know that the CG of Customs, Inspector General of Police have not sent any officer to go to the port and collect bribe, ” if any officer decides to abuse his powers, report it to the NAGAFF High Command and we would act” he assured.

He said that a letter has gone out to the office of the Inspector General of Police, informing him of the activities of the 100% committee.

While addressing members of the Committee, he said “You are going to face a lot of oppositions, your job is to observe, don’t engage in any discussion with anybody, just watch what they are doing and take your inventory, if you see anything to the contrary, send the report to the committee, they know what to do with it”

“We have to partner with the government to build a better Nigeria, and there is nothing that says we must give our lives to giving bribes, it is not a law.
Every government organisation in the port have their standard of operations, freight forwarders must comply to all these procedures and stop giving bribes.
If you don’t have knowledge, you don’t know what you are doing”

“On this movement, a lot of people are panicking, especially people who carry containers in the night, but the truth is that we cannot continue this way, we must let the government know that we are responsible people”

“From January to January, you carry huge sums of money, but at the end of the day, nothing is in your pocket, you cannot even dress well, you are hypertensive because you are not doing the right thing” he said

Aniebonam lauded the Chairman of the Committee, Mr Tank Ibrahim for establishing a befitting Headquarters and operating base for the group. He described Tanko as one of the individuals who have added great value to NAGAFF.

He threatened to start naming and shaming other members of NAGAFF in position of authority, especially the chapter chairmen who have not added value to the association.

Speaking further, Aniebonam said “NAGAFF is a non profit making organisation, you can imagine what i went through to establish NAGAFF in all the Federation, I am happy that I am now seeing results, even if I drop dead tomorrow, I know there are people who can carry on”.