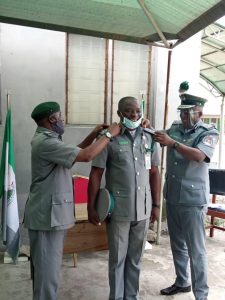 PRO, WMC, DSC Emmanuel Tangwa being decorated with his new Rank by the CAC, Comptroller Peters and another senior officer.

The Customs Area Controller of the Western Marine Command of the Nigeria Customs Service (NCS),Comptroller Olugboyega Peters has said that the newly promoted Senior Officers in his Command have to justify their promotions as its comes with additional responsibilities.

Peters said this yesterday during the decoration of fifteen officers of the command with their various ranks reminding them that promotion is a thing of joy and that much is expected of them with their new ranks saying ” To whom much is given, much is expected “. 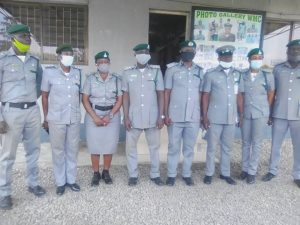 Promoted Officers in a group photography with their CAC, Comptroller Peters.

He called on the promoted officers not to dissapiont the Service as according to him, promotion is not a right, but a privilege.

Among the Officers promoted to their new ranks were a Deputy Comptroller (DC) I. Ohanyere, two Assistant Comptrollers ( ACs) W.F Mohammed and S.O Ariyibi and a Superintendent of Customs (SC) A.G Musa.

It could be recalled that the NCSB has recently approved the promotions of over 2,600 Senior Officers of the Service which includes five ACGs, Comptrollers, Deputy Comptrollers, Assistant Comptrollers among other senior officer’s ranks.
The promoted officers were backdated to January 2019 as their promotion dates.