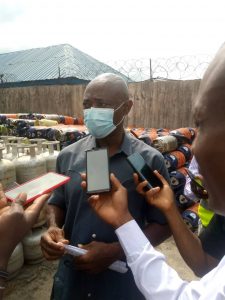 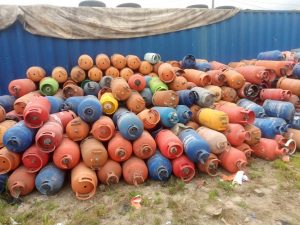 A breakdown of the products which SON said were imported from China and Turkey, includes; 4×40 containers of LPG Cylinders of various sizes, 15 rolls of aluminum roofing sheets, and 15 bundles of fake corogoted roofing sheets. 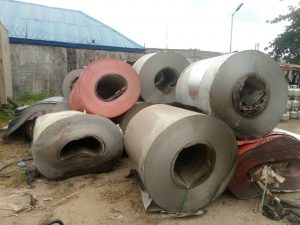 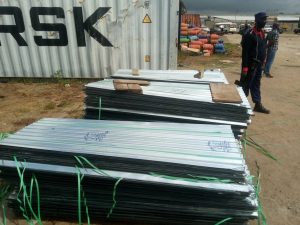 He said: “The products were sized due to non compliance to standards, failing of SON’s laboratory test and not having SONCAP certificates , which means that they are fake, not approved by SON for importation into Nigeria and not fit for use.”

According to him, destruction of the products is the only option available to SON, saying if the products are allowed to get into the market they would constitute serious danger to the lives of Nigerians.

“These products being destroyed today (yesterday) by SON have failed our laboratory test, as such they are substandard and dangerous to users. We are not happy destroying peoples goods, because it cost huge money, but we cannot compromise to save money and endanger the lives Nigerian citizens”

On how the product came into the country, he said: “Most of these products were discovered through SON raiding of warehouses and were found to be substandard. They did not come with SONCAP. And as you know SON is not in the ports , so it is difficult to really know from which source , seaports or border posts. Most of them , when we raid their warehouses, they will abandoned the goods and flee, no documents to show from which port they really came from”. Also, the suspects disappear once we intercept the products, but we continue investigation to arrest them.

Manafa disclosed that after the destruction of the products, they will be sold to recycling firms and the proceeds remitted to the Federal Government’s Treasury Single Account (TSA).

Also speaking, Engr. Nwaoma Olujie, Group Head, LPG, Standard Organisation of Nigeria, urged Nigerians to be wary of the LPG Cylinders they are buying in the market, saying what should be looked out for when buying are: Country of origin of the cylinder, address of the manufacturer and the date of manufacture. “Those are the most important features of a genuine cylinder, anyone that does not have them is fake.

She further said that the lifespan of an LPG Cylinder is 15 years. “The period the cylinder lasted before you bought it inclusive”.