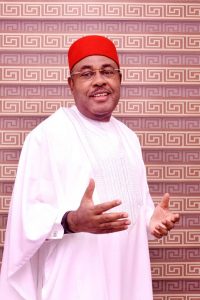 Sequel to the new zeal my Members of the Association of Nigerian Licensed Customs Agents (ANLCA) to eschew crises and chart a new course for the respected body of Customs Brokers in Nigeria, two groups yesterday paid a solidarity visit to the National President of the Association, Hon. Iju Tony Nwabunike.

The groups, Muritala Mohammed International Airport Chapter of ANLCA and Oganiru -Igbo, an organized body of Igbo extraction of Customs Brokers from the Airport visited the ANLCA, NECOM to show their supports and also pass a Vote of Confidence on the leadership of Tony Nwabunike and his entire Executive members.

In an address presented by the Airport Chapter of the Association during the visit, stated some demands and assurances which includes, “The License owners of Muritala Mohammed International Airport Chapter is solemnly behind the present NECOM and we pledged our loyalty to Mr President and Exco. That we want election to be taken in our chapter before the expired date of the Interim Government. That we want the status quo of the Interim Government to remain as it is. We want ASECO to give us viable time table for the election and also give us the assurance that the time table will be followed accordingly.”

They also demands that, NECOM representative/ official should visit them at least twice a year and that the NECOM should appoint a representative from their chapter as intermediary between them and NECOM to avert information gap among other demands. Over 35 members signed the statement.

On their part, the Oganiru-Igbo stated in their address to the ANLCA, NECOM that they are a Pan -Igbo Think Tank /Interest Group for the upliftment, renaissance, promotion and protection of Igbo interest in the Freight and Forwarding industry in Nigeria.
According to them, they paid the solidarity visit to the ANLCA National President, Hon. Iju Tony Nwabunike to align itself with the tremendous and selfless services he has conceptualized and nurtured to fruition in ANLCA.

Some of their demands and appeals includes, ” That we stand in solidarity with you on the myriad of orchestrated Court cases/ litigations against your person and your presidency of ANLCA.
That all Men/ Women of goodwill and voice of reason in the Clearing and Forwarding business are resoundingly in agreement that your second term ambition will be pursued with such vigour unprecedented in the annals of electioneering. That we implore our aggrieved compatriots to find it expedient to dialogue with our own brothers and sisters viewed as not in
tandem with their own ideas/ ideologies” And that they urged all gladiators laying political and economical landmines through frivolous litigations to cease fire and return to the trajectory of vision and reason , as there will not be even a pyhric victory for them anywhere, the group said.

Responding, the ANLCA National President, thanked them for their show of solidarity and love and promised them that all their demands and appeals are genuine and that NECOM, under his leadership is proud of them.

Nwabunike further promised that his leadership in ANLCA is to build a strong institution and appeal for all to shun hatred and crisis in the Association, but to work for peace and progress for a greater ANLCA.