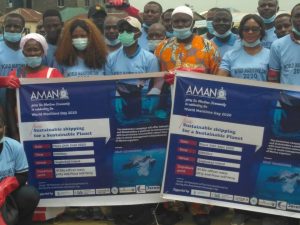 Coastal communities in the Country have been urged to embrace high sanitation standards and stop dumping their wastes into the open oceans.

This advice was given by the Alumni of Maritime Academy of Nigeria, Oron ( AMANO) during a clean- up exercise carried out by members of the body in Lagos to mark the 2020 World Maritime Day celebrations. 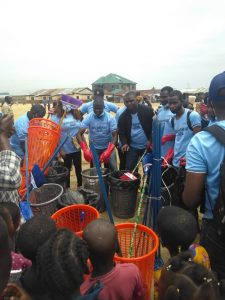 According to them, doing so will not only promote healthy living, but also enhance maritime economy for increased job and wealth creation among coastal settlers especially the youths.

The message of the Alumni was during a clean up exercise of Sagbokoji Island, in Amuwo Odofin Local Government Area, Lagos State, in commemoration of this year’s world maritime day.

Sagbokoji community in Amuwo Odofin Local Government Area, is one of the Islands in Lagos State and like other settlements on the shore of the Atlantic Ocean, at the Lagos end, it is a hub of maritime businesses. 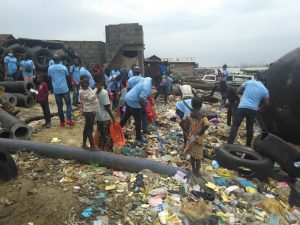 Watching from the community square, boats of different sizes and shapes moved non-stop on the lagoon, very close to the ocean just as loading and offloading of containers from ships were carried out.

Although, the community itself appeared relatively neat, areas near the lagoon including the water body were nothing to write home about as they were hugely polluted with waste materials, especially nylon bags and plastic bottles which littered at the shores.

President of AMANO, Austin Ume-Zurike, said the cleanup exercise at Sagbokoji, became necessary to raise the consciousness of Nigerians in riverine communities on the need to promote healthy environment.
According to Ume-Zurike a clean environment is necessary for the thriving of Maritime economy as shippers, Mariners and Tourists would like to come and invest in places that are decent and free of pollution.

He stated that part of the World Maritime Day celebration by AMANO was to identify communities within the maritime environment and sensitize them on the benefits of keeping their environments clean.

“We want to teach to them how to take care of the environment. Keeping the environment clean is the responsibility of everyone. As community, you generate the waste , you should be able to take of your wastes”, he said.

The exercise involved public sensitization of the the residents and cleaning of the surroundings by the members and AMANO and the selected youths of the community.
Ume-Zurike noted that the cleanup exercise would be an annual thing in which other communities would be adopted.

He revealed that going forward, AMANO would partner waste disposal companies for seamless waste collection and management in coastal areas, just as the debris gathered during the Sagbonkoji event would be properly managed.

“Part of our activities is to engage the Marine pollution companies, waste disposal companies and recycling companies. Basically, we will separate the wastes , then they can be disposed in environmentally friendly way. The platsics will be recycled”.

“We hope to make it an annual event, moving from one community to another. People in the environment will know the benefits of keeping it clean. Wastes affect everything including making it difficult for ships to navigate and berth comfortably”.

The AMANO president appealed to riverine communities to always be willing to welcome organisations with the intention of cleaning their areas as it is in there best interest.

His words; “Communities within the riverine areas should understand that their wastes pollute the environment and when associations like ours come to their support to give them sensitization exercise, they should welcome them. Be willing to listen rather than make demands”.

Receiving the guests on behalf of the Traditional Ruler of Sagbonkoji Community, the Palace spokesperson, Chief Atodgmiu Noel, thanked them for choosing their area for the exercise.very
While noting that different Orgainsations have been coming to the community for one reason or the other, Chief Noel who goes by the title ” Asiwaju of Sagbonkoji”, pleaded to AMANO to assist them in the area of job creation for their youths.

“Our youths are jobless. If you can grant opportunity for the youths to take part in cleaning like this or in other things, we will be glad. This is a popular community , we vote massively during elections but the politicians easily forget us .

” We are suffering. No electricity. With the high cost of fuel the situation is bad We need help. Let the Orgainsation carry our youths along in the area of employment”, he added.”

All the tools used for the cleanup exercise including waste baskets, rakes and waste packers were donated to the community to enhance their capacity in cleaning up the Maritime environment in the over seven villages that make up the area.

The theme of this year’s World Maritime Day celebration is ” Sustainable Shipping for a sustainable planet”.