The Nigeria Customs Service  (NCS) has officially denied skewed appointments into its Management cadre of the Service.

The statement reads “the  attention of Nigeria Customs Service has continued to be drawn to a skewed narrative of Northernization following the recent appointments into the management cadre of the Service despite explanations by the Service at different times and fora.

” For the umpteenth time, the Service wishes to state as follows: That all the zones of the country are equally represented at the management cadre of NCS.Vacancy for new appointment is only made available through retirement resignation, dismissal or any natural cause.When any of the above occurs, such vacancies are filled by new appointments from the zone(s).

” Two DCG vacancies provided spaces for two  Senior serving ACGs from the same zones of North-East and North-West to be appointed to the rank of DCG. This therefore increase the number of ACG vacancies to five which must be filled from the two zones that have the vacancies.”

The statement further explained that inline with the procedures, new appointments were made.

“Following above appointments, the status of the Service Management stands as listed below. 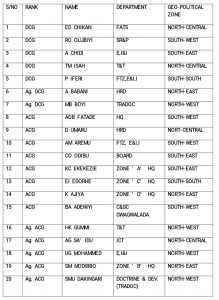