Home » News » DISQUIET AT SON, AS FAROUK SALIM TAKES OVER FROM ABOLOMA, AS NEW DG

DISQUIET AT SON, AS FAROUK SALIM TAKES OVER FROM ABOLOMA, AS NEW DG 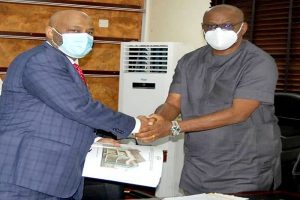 Alhaji Farouk Salim (L) taking over from Osita Aboloma, as the new DG of SON on Monday in, Abuja.

There is disquietness at the Standards Organisation of Nigeria (SON) as the new Director General, Ahaji Farouk Salim takes over from Mr Osita Aboloma as the new DG of SON. The quiet handover ceremony took place on Monday at the SON’s headquarters office in Abuja, FCT.

During his taking over on monday, Alhaji Farouk Salim has promised to bring changes to the organization by promoting public safety, standards in local manufacturing, import and export and creating an enabling environment for innovations that will stimulate national self-sufficiency.

He stressed the need to strengthen enforcement through increased cooperation with the relevant authorities like the Police, the Judiciary, the National Assembly and the Executive arm of Government.

He promised to simplify payment systems through information technology, to guarantee improved service delivery, operational efficiency and encourage customer feedback and suggestions towards achieving the goals.

Earlier, the outgoing Director General, Osita Aboloma commended his predecessors for laying a solid foundation for the advancement of standardization activities in Nigeria in line with international best practices.

He assured Salim of bequeathing to him, a crop of highly competent staff in virtually all fields of standardization. Aboloma said that the last four years has brought greater relevance of the SON mandate to Nigerians more than ever before.

Alhaji Farouk Salim hails from Kano State and attended Science Secondary School, Dawakin, Kano State and Ahmadu Bello University. He is a Pharmacist based in the United States, before his appointment. He is believed to be an ally of President Buhari as a member of the defunct Congress for Progressive Change ( CPC) a political party formed by Buhari. CPC later merged with ACN to formed the ruling All Progressive Congress (APC).