The Comptroller General of the Nigeria Customs Service, Col. Hameed Ali (rtd) has commended 11 Officers of the Western Marine Command of the Service for their gallantry in intercepting and seizure of 10,020.50kg of Cannabis Saliva at the high sea early this year. 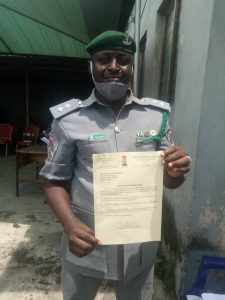 Ali in a letter addressed to the eleven officers said they have demonstrated zero tolerance to corruption and other vices in line with the the policy thrust of this administration.

The letter reads ” I write to commend your efforts in exercising due diligence on the interception , arrest and seizure of 10,020.50kg (over 10 tones) of Cannabis Sativa ( Marijuana) which happens to be the biggest catch of a single item ever seized in the history of Nigeria Customs Service on high sea. 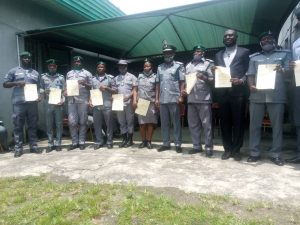 Group photography of the gallant officers with their CAC.

“By this act , you have demonstrated zero tolerance to corruption and other vices in line with the policy thrust of this administration.

“I therefore enjoined you not to relent on your efforts and implore you to remain focused.
I am therefore , through this letter, conveying my commendation and indeed that of the entire management of the Service to you on this laudable feat”.
The letter was signed by Col. Hameed Ali, the Comptroller General.

Speaking during the presentation of the letters to the gallant officers in Lagos on Friday, Customs Area Controller, Comptroller Olugboyega Peters said the seizing officers act have demonstrated zero tolerance to corruption and other vices in line with the Policy Thrust of the present administration.

Peters noted that the outstanding performance of the Officers and Men involved in the seizure has been recognized by the CGC, Col. Hameed Ibrahim Ali (rtd.) together with his management team by giving each of them a commendation letter.

He pointed out that the commendations would serve as a morale booster to the seizing officers and also as encouragement to other personnel of the Western Marine Command.

Peters added that the feat has also attracted International accolades from the United Nations Office of Drugs and Crimes (UNODC) that has expressed support for the fight against maritime crimes with donation of tele conferencing equipment to be used by the security agencies to fight sea piracy and other maritime crimes.

On the performance index of the Command during the period, Seven items with Duty Paid Value of N 18, 893,543 were seized between July and September 2020.