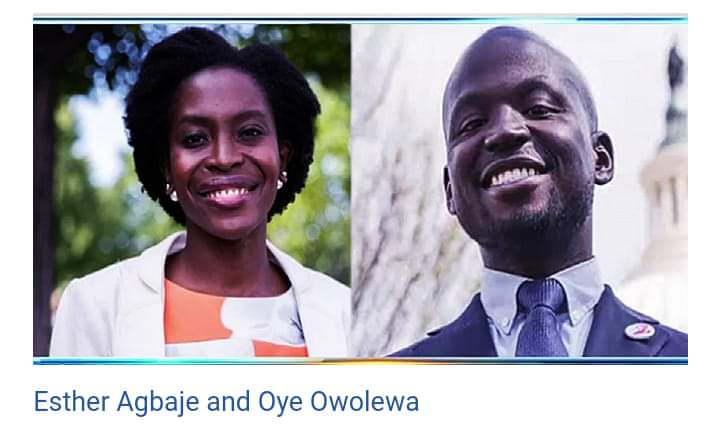 As the world awaits the final results of the United States of America ( USA) presidential election between the incumbent President and Republican candidate, Donald Trump and former Vice President and Democratic candidate Joe Baden, two Nigerian-Americans, Esther Agbaje and Oye Owolewa, have been elected into the House of Representatives in America.

Esther Agbaje, contested to represent District 59B in the Minnesota House of Representatives on the platform of the Minnesota Democratic-Farmer-Labor Party. The 35-year-old scored a total of 17,396 votes, which represents 74.6 per cent of the total votes cast and was elected.

Agbaje has a law degree from Harvard University, a Master’s from the University of Pennsylvania, and has served in the U.S. Department of State, among others.

On the other hand Oye Owolewa, contested to represent the District of Colombia, on the platform of the Democratic Party. He won with 82.65% of votes which represents 135,234 votes.

Owolewa is a Nigerian born Democrat who hails from Omu-Aran Local Government Area of Kwara State, Nigeria. He is a Ph.D holder in Pharmacy from the Northeastern University, Boston USA.

Himself and Agbaje are the first Nigerians to win and be elected into the USA congressional seats.