We Need Bank to Support Buying of Ships- Udonwa 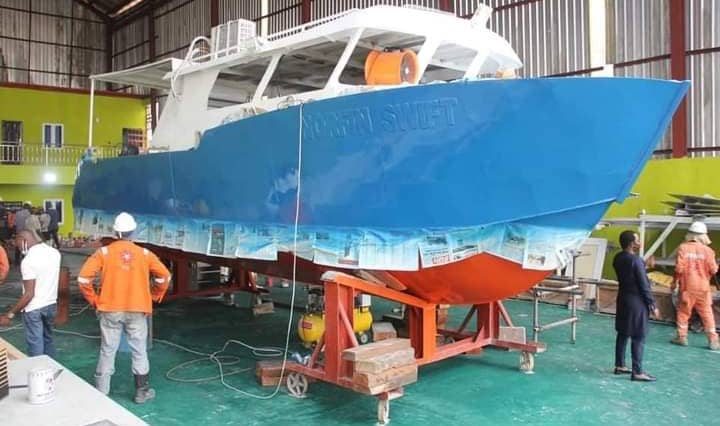 A ship builder and Managing Director of Norfin Offshore Shipyard Limited , Engineer Iniekong Charles Udonwa has appealed to the Akwa Ibom State government to established a bank that will give out loans for buying of ships. He also encourage Akwa Ibom indigenes to get involved in maritime, oil and gas industry activities , instead of only politics.

He made the call during the commissioning of a Vessel produced by Norfin Offshore Shipyard Limited located in Oruk Anam Local Government Area of Akwa Ibom State.

The shipyard, a private investment of a Singaporean based Akwa Ibom born ship manufacturer, Engr. Iniekong Charles Udonwa, is located along the Ikot Abasi-Port Harcourt expressway.

The historical grand opening ceremony which features the unveiling of ‘MV Norfin Swift’, a 9 meter security patrol vessel built by the company to be used by security operatives in securing the nation’s waterways was recently carried out.

Fielding questions from newsmen at the shipyard, the Chairman and CEO of Norfin Group, Engr. Iniekong Charles Udonwa explained that aside the security vessel that would be ready for unveiling on , the company has the capacity for ship building, ferries, and all kinds of ship, adding that already, the company has received orders from clients to build other sea going vessels.

“This is a private Investment, Akwa Ibom State government has provided a secured environment and community support for the investment.

“We will soon embark on construction of other sea going vessels, including, ferries, barges, fishing trawlers among others,” Udonwa said.

Worried by the seeming lack of interest by indigenes of the state in the maritime, oil and gas sector, Engr. Udonwa who urged Akwa Ibom people to pick interest in the maritime industry said ;

“Akwa Ibom produces 65% of crude oil in Nigeria and there is need for Akwa Ibom people to get involved in the maritime sector. This is a money spinning investment, and Akwa Ibom is loosing $5million daily following the inability of our own people to get involved in ship owning business and investment in the maritime sector. All we are concerned is politics”

“For now we are building a security patrol vessel. We will also build fishing trawler, boats, ship”.

He made a case for a state owned financial institution that would help the people access credit facilities to enable them acquire ships and invest in the nation’s maritime industry.

“We need an Akwa Ibom bank that would support our people to buy ship and invest in the maritime and oil and gas sector” .